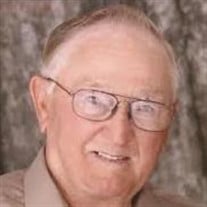 Eugene J. Brecka, 81, of David City, passed away February 26, 2015 at Butler County Health Care Center. Eugene was born December 4, 1933 to Anton P. and Barbara (Roubal) Brecka on the farm near Rescue. He attended Prague High School and after graduation, he served in the U.S. Army from July 22, 1953 to May 17, 1955 during the Korean War. He married Sharon Woita on November 14, 1964 in Abie, and were blessed with three children and nine grandchildren. Over the years, Eugene worked for Abel Construction, Walker Manufacturing and was a life long farmer in the Abie area until his retirement in 2006. Eugene and Sharon owned G & S 2-way, CB Radio business out of their house for several years. He was a member of St. Mary's Catholic Church, and the Schuyler Legion. He enjoyed sports his entire life, playing basketball in high school and softball for Abie later in life. Eugene liked to spend time with his grandchildren, watching them play various sports and making them his "special popcorn." He also enjoyed watching all Husker sports and attending games when he had the opportunity. Eugene would make frequent trips to the area casinos and Las Vegas for special occasions. He is survived by his wife of 50 years, Sharon; children: Ron (Pam) Brecka of Lincoln, Lisa (Tim) Hoeft of Holdrege, and Amy (Eric) Jelinek of Abie; grandchildren: Melanie and Samantha Brecka, Lauren, Jordan and Trenton Hoeft, and Madisen, Allisen, Jacksen and Masen Jelinek; brother: Anton N. (Elaine) Brecka; sisters: Joan (Valerian) Svoboda and Maggie Hlavac; many nieces and nephews. Eugene is preceded in death by his parents; sister: Betty Stara; brother-in-law: Alvern Hlavac, and niece Monica Saalfeld.

The family of Eugene Brecka created this Life Tributes page to make it easy to share your memories.

Send flowers to the Brecka family.