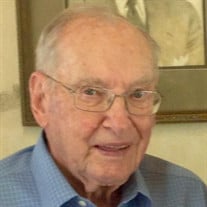 Eugene B. Bartunek, 90, of David City died Friday, July 15, 2016 at the Butler County Health Care Center in David City. IN LIEU OF FLOWERS: Memorials to Masses, Aquinas Guardian Angel Fund or Family Choice. Eugene Bartunek was born on the farm west of Abie on March 28, 1926 to V.A. and Tillie(Prochaska)Bartunek. He attended Grade School District 39 and graduated from Dwight Assumption High School in 1944. He entered the US Army on December 20, 1944 where he served in the Luzon Campaign, earning several commendation medals including the Bronze Star. He had achieved the rank of Technician, Fourth Grade, by the time he was discharged on November 8, 1946. After his discharge, Gene went on to earn his private pilots license. Gene married Celestine "Sally" Slosser on August 10, 1949 at Ss. Peter and Paul Church in Abie. Three daughters were born to this union. Gene farmed and also worked for the Butler County ASCS office for 38 years before retiring in 1994. He was a member of VFW #5814 of David City, and was a past Grand Knight of Tihen Council 1717, Knights of Columbus, David City. He was also honored to serve as the Past Nebraska State Deputy and Past Faithful Navigator, 4th Degree #605 Assembly of the Knights of Columbus. Gene's faith and family were two very important aspects of his long life. He was very active in church activities as an acolyte, Aquinas School Board and the local Knights of Columbus council. He was a Husker Football fan, loved to go to dances and listen to polka music. He enjoyed bowling and photography, taking countless pictures and home movies throughout the years. He and Sally enjoyed traveling across the country. One of his most memorable trips was back to the South Pacific area and the Philippines where he was stationed during the war. Gene is survived by his wife, Sally, daughters, Deborah (Mike) Richter of Eustis, Ne, Kathleen (Ron) Rees of Greeley, CO, and Janelle (Robert) Marsh of Malcolm, Ne. 4 Granddaughters, 14, great-grandchildren, 2 brothers, Bernard "Beno" Bartunek of Abie and Dennis Bartunek of Lincoln, Sisters-in-law, Stella Mihulka of Omaha and Lucille Slosser of Council Bluffs, Ia, and Brother-in-law, Edward "Bud" Hines of Morse Bluff. He was preceded in death by his parents, and one grandson, Jeffrey Rees.

The family of Eugene B Bartunek created this Life Tributes page to make it easy to share your memories.

Send flowers to the Bartunek family.