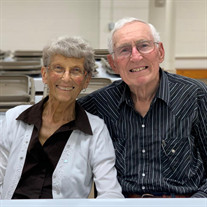 Ernest E. Shonka, 84, of Ulysses, died Thursday, December 30, 2021 at the Butler County Health Care Center in David City. Doris A. Shonka, 80, of Ulysses, passed away at the Butler County Health Care Center in David City on Tuesday, January 4, 2022, five days after her beloved husband, Ernie. A Funeral Mass for both Ernie and Doris will be held on Thursday, January 6, 2022 at Immaculate Conception Church, Ulysses, Nebraska. Burial will be at 2:00pm at St. Mary's Cemetery, Ulysses The family has requested that IN LIEU OF FLOWERS, PLANTS, and STATUES, memorials be directed to Aquinas Guardian Angel Fund, Immaculate Conception Church, or Sisters of the Diocese of Lincoln. Immediately following the Funeral Mass, a lunch will be served in the church basement. Burial will be held at St. Mary's Cemetery, Ulysses. Ernie was born on July 21, 1937 on a farm near Clarks, NE and was the oldest son of Ernest Sr. and Agnes (Hajek) Shonka. He attended Surprise school through 10th grade, then Ulysses where he graduated in 1955. After high school he worked at the Air Force base in Lincoln until he turned 18. He then went to work at Behlen Manufacturing in Columbus. Ernie was united in marriage to Doris Malovec on May 26, 1962 at Immaculate Conception Church in Ulysses. They raised their six children near Shelby and eventually on the home place while Ernie helped farm along side his dad. Ernie took over farming the home place when his dad retired in 1975. Ernie continued to work at Behlen’s as a tool & die specialist until he retired in 2002 after 47 years of employment. He continued farming until he retired in 2008. Ernie was a member of Immaculate Conception Parish and Fourth Degree Knights of Columbus. He enjoyed camping, fishing & hiking the mountains with his family; he loved farming and planting trees. Ernie’s kids and grandkids were his pride and joy, and he enjoyed attending their sports, musicals, concerts and especially Aquinas Football and Wrestling. Ernie is survived by his loving wife, Doris; sons: Keith (Karen), of Bellwood; Dave (Renee) and Gregg (Amy), both of Lincoln; Chris (Veronica), of Fort Collins, CO; daughters: Kathy (Mike) Beran and Sherri (Jason) Suelter, both of Lincoln; sisters: Marilyn Chmelka, Betty (Alvin) Wellman, Delores Stuhr, Sister-in-law: Aggie Shonka, 26 grandchildren, 7 great grandchildren, and many nieces and nephews. He is preceded in death by his son: Kenny; parents: Ernest & Agnes Shonka; brother: Willie, brothers-in-law: Mike Birkel, Tony Stuhr, Don Malovec, Jimmy Chmelka; and sister-in-law: Janet Malovec.

The family of Ernest E Shonka created this Life Tributes page to make it easy to share your memories.

Send flowers to the Shonka family.