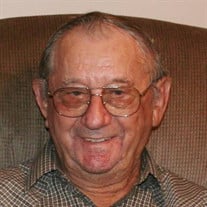 Ernest J. Moravec, widower of Alice, 94, of David City, formerly of Ulysses, died Friday, April 3, 2015 at david place in David City. IN LIEU OF FLOWERS: Memorials to: Butler County Health Care Future Generations St. Mary's Church Immaculate Conception Church, Ulysses. Ernest J. Moravec was born on July 10, 1920 on the farm near Ulysses, Nebraska to Joseph and Anna(Slosar)Moravec. He married Alice M. Behne on April 24, 1944 at St. Francis Church, Center. Two children were born to this union. Ernie spent many years farming. He loved to work the land and also enjoyed raising hogs. He spent a few years in Seatlle, Washington working for Boeing Manufacturing before retuning to Nebraska to resume farming. He also enjoyed deer hunting and fishing, working out in his garden, spending time with his grandkids and going out to eat. Ernie was also a member of Immaculate Conception Church, Ulysses for over 50 years. His wit and charm will be missed by all those that knew him. . Ernie is survived by his daughter: Donna Lou(Dennis)Steager of Rising City, Daughter-in-law: Donna Moravec of David City, 5 grandchildren: Mike and Donnie Moravec, Jeanette Work, and Donnie and Dannie Steager. 14 Great-grandchildren. He was preceded in death by his parents, his wife Alice in 2014, son, Donald and sister, Ann Raiter.

The family of Ernest J Moravec created this Life Tributes page to make it easy to share your memories.