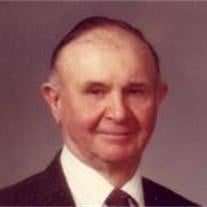 Emil Spatz, 94, of Brainard, passed away Saturday, March 19, 2011 at David Place in David City. A funeral mass will be held at 10:30 am on Wednesday, March 23, 2011 at Holy Trinity Catholic Church in Brainard. Visitation will be held from 4:00 - 8:00 pm Tuesday, March 22 at Holesovsky Mortuary in Brainard. Visitation will continue at Holy Trinity Church on Wednesday at 9:30 am with a Rosary at 10:00 am, followed by the mass at 10:30 am. Burial will be in the Holy Trinity Cemetery with full military honors by Rejda Legion Post 273 of Brainard, NE. Emil was born in Brainard to Anton and Ludmilla (Kracman) Spatz on February 25, 1917. He attended country school and graduated from Brainard High School in 1936. Emil served as a gun crewman in the heavy artillery division in the U.S. Army from 1942 - 1946. He was in several camps and served in England and France before being discharged in 1946. He was awarded 2 Bronze Stars for his service. On January 22, 1947, Emil married Caroline Eckstein in the Sacred Heart Catholic Church in Cedar Hill. Emil was a member of the Rejda Post 273 American Legion in Brainard and served on a rural school board. He enjoyed raising sheep, Czech music and dancing. Emil is survived by his wife Caroline, children Mary Anne (John) Juricek, of Denton, John (Keverne) Spatz and Kenny (Margie) Spatz, of Brainard and Carol (Byron) Nienhueser of Beaver Crossing; brother: Adolph Spatz of Bee, sister: Marg Ratkovec of Mead; 14 grandchildren, 17 great grandchildren, 5 step grandchildren and 1 step great great grandaughter. He was preceded in death by his parents, Anton and Ludmilla Spatz, brothers: Louis, William, Ray and Dan, and sisters: Gladys and Irene; and grandchild Chris Juricek. Emil passed away peacefully at David Place in David City, Nebraska on March 19, 2011 at the age of 94 years and 25 days. The family suggests Memorials to: Masses at Holy Trinity Church, Rejda American Legion Post 273 in Brainard, Brainard American Legion Auxillary or Family's Choice.

Emil Spatz, 94, of Brainard, passed away Saturday, March 19, 2011 at David Place in David City. A funeral mass will be held at 10:30 am on Wednesday, March 23, 2011 at Holy Trinity Catholic Church in Brainard. Visitation will be held from... View Obituary & Service Information

The family of Emil Spatz created this Life Tributes page to make it easy to share your memories.

Send flowers to the Spatz family.