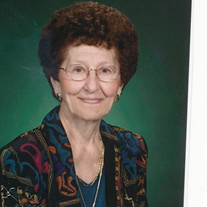 Elsie M. Divis, 88, of David City, passed away on April 12, 2014 at the Butler County Health Care Center. Mass of Christian Burial will be Wednesday, April 16, 2014 at 10:30am at St. Mary's Catholic Church with Fr. Bernard Kimminau officiating. Visitation will be Tuesday from 4-7pm followed by a 7pm Rosary Service all at the church. Viewing will resume one hour before mass on Wednesday. Burial will be in St. Mary's Catholic Cemetery. Memorials have been suggested to "In Care of the Family". Elsie M. Divis was born January 15, 1926 to Raymond and Antonia(Hofbauer) Svoboda on the farm near Brainard, NE. She was the second of six children. Elsie grew up on the farm and attended country school, Holy Trinity Catholic School and High School. She married Ernest T. Divis on June 19, 1944 at Holy Trinity Catholic Church. Elsie was baptized, received her 1st Holy Communion, and was confirmed at Holy Trinity Catholic Church, as were her parents, her husband, and all four of her children. She enjoyed camping, fishing, riding her bike, and going on walks. She especially loved her time with her children and grandchildren. Elsie volunteered at St. Joseph's Court and Villa. She would run the activies, and make sure all the plants and flowers got watered. She was a 30 year member of the American Legion Auxiliary, Rejda Unit 273 of Brainard. Elsie is survived by her children: Sharon Hollibaugh(David Behne) of Brainard, Gary(Sharon) Divis, of Salem, MO, Ron(Connie) Divis, of Arlington, TX, and Wayne(Cindy) Divis, of Dorchester, NE; Sister: Lucille(Earl) Brauckmuller; Sister-in-laws: Mabel, Gladys, Nadine, and Adeline Svoboda; 19 grandchildren; 46 great-grandchildren; and 2 great-great-grandchildren. She is preceded in death by her parents; Husband: Ernest in 2007; Brothers: Leonard, Raymond, Ernest, Emanuel, and Danny Svoboda; and Daughter-in-law: Diane Divis.

The family of Elsie M. Divis created this Life Tributes page to make it easy to share your memories.

Send flowers to the Divis family.