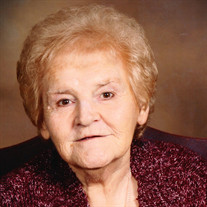 Elizabeth "Betty" Yindrick, 74, of David City died Monday, May 28, 2018 at David Place in David City. Memorials: In Care of the Family Betty was born April 16, 1944 to William and Jeannette (Harpin) McCarthy in Marlborough, Massachusetts. She attended Immaculate Conception Grade School, the former St. Ann’s Academy and then graduated from Leo’s Beauty Institute and worked as a beautician. In 1963 she met the love of her life, Joseph, while he was stationed in Massachusetts serving in the US Army. They were married on September 5, 1964 in Marlborough and then she moved, sight unseen, with her new farmer husband to their homestead east of David City, NE. Raising five children and the farming life kept her busy until she went to work at the Butler County Hospital for 13 years as a nurse’s aide and then a cook at the Northside Café for over 20 years. She was an active member of the Assumption Appleton Parish and their PCCW as well as spent a number of years as a 4-H leader. She found herself becoming active backstage support for the American Czech Brass Band assisting her front man husband and planned many skits with their longtime friends, Bill and Donna Andel. She was always a doting mother and Nana no matter how busy. Family was most important to her and being far apart from her birth family was difficult. She held tight to her east coast roots and visits “home” were deeply cherished. She is survived by daughters Michele of Elkhorn, NE, and Nicole Sylvester of David City, sons Joseph Jr. of Lincoln, William of David City and Eric of Arvada, CO, daughters in law, Sabine(Langer), Delaine(Glock), Melissa(Taylor), Jennifer(Hindman) and son in law, James Sylvester, brother Edward McCarthy, sisters in law Theresa Kuzelka, Rita Helman, Margaret From and Mary Elizabeth McCarthy, granddaughters Sydni Sylvester, Allyson and Mara Yindrick, grandsons Jaydn Sylvester, Caleb, Will, Jude, Augustine, Samuel, Alexander and Joseph Yindrick, step granddaughters Jessica Richards and Jennifer Cook, two step great grandsons Cade Richards and Tractin Cook, numerous nieces and nephews as well as great and great-great nieces and nephews. She is proceeded in death by her husband, parents and in laws, Louis and Amelia Yindrick, brother, William McCarthy, sisters in law Marlene Palik and Ann Yindrick, brothers in law Jerome Palik, Ron Kuzelka, Joseph Helman and Mel From, sister in law Rita McCarthy and nephews Michael McCarthy and John Palik.

The family of Elizabeth "Betty" Yindrick created this Life Tributes page to make it easy to share your memories.

Send flowers to the Yindrick family.