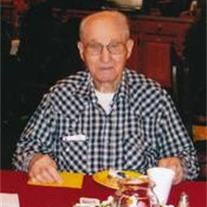 Edwin J. Spatz, 99, of David City, passed away on October 25, 2012 at St. Joseph's Villa in David City. Mass of Christian Burial will be Wednesday, October 31, 2012 at 10:00 am at Sts. Peter and Paul Catholic Church in Abie with Father Ronald Homes officiating. Interment will follow at Sts. Peter and Paul Catholic Cemetery. Viewing will be on Tuesday, October 30, 2012 at Chermok Funeral Home from 5 until 7 PM with a 7 PM Rosary. Viewing will resume one hour before mass on Wednesday. IN LIEU OF FLOWERS: Memorials have been suggested to "Familiy Wishes" or to "Masses". Edwin J. Spatz was born January 13, 1913, in Abie to James L. and Marie Rose(Voboril) Spatz. As a young man he helped his parents on the family farm. He attended school at Nebraska School for the Deaf, in Omaha, where he participated in playing basketball. Being the top scorer, he led the team on to a state championship and was the last living member. Edwin enjoyed his new cars, fishing and boating. He always studied every little gadget and could always make something just a little bit better. After moving to St. Josephs Court in 2007, he enjoyed going on trips and participating in the group activities with people his age. After transferring to the Villa he kept active and for this his family is very grateful. Although he could not hear or speak, he was a man who was greatly loved and respected by his family, brothers, sisters, and nieces. He lived his life to the fullest and was an example of how life should be lived. A big smile and thumbs up was a good sign that everything met his approval. He is survived by his brother: Robert R. Spatz of Mission, TX; nieces: Phyllis(Joe) Byers of Fordland, MO, Virginia (Yindrick) Stratmann, of West Point, NE, Betty (Yindrick) Betzen, of David City, NE, and Elizabeth Spatz of Redundo Beach, CA; ten great nieces and nephews, and fourteen great-great nieces and nephews. Edwin is preceded in death by his parents, brother: James Jr., sisters: Marian Spatz, and Gladys Yindrick, brother-in-law: Lee Yindrick, and sister-in-law: JoClare Spatz.

Edwin J. Spatz, 99, of David City, passed away on October 25, 2012 at St. Joseph's Villa in David City. Mass of Christian Burial will be Wednesday, October 31, 2012 at 10:00 am at Sts. Peter and Paul Catholic Church in Abie with Father... View Obituary & Service Information

The family of Edwin Spatz created this Life Tributes page to make it easy to share your memories.

Send flowers to the Spatz family.