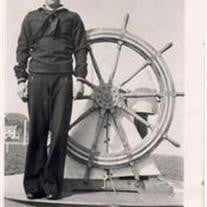 Edward Dvorak, 93, of Omaha died Saturday, February 19, 2011 in Omaha. Funeral Services will be held at 2:00 pm Wednesday, February 23, 2011 at Holesovsky Mortuary in Brainard with Pastor Glenn Hubbard officiating. Visitation will be one hour before services at the funeral home. Burial will be in the Bohemian National Cemetery in Brainard with military graveside services under the direction of Rejda Post #273. Edward was born October 20, 1917 to Joseph and Sophia (Michalek) Dvorak on a farm near Brainard. In, 1940, he enlised in the U.S. Coast Guard,serving during all of WWII. During that time, he served overseas in the South Pacific with Navy Services. He was assigned to the USS Persia, to transport troops and also the USS General Scott LST26, to supply invasion ships. He was discharged in June 1946. Following his military service, he moved to Omaha and worked for Armour's Packing House in Omaha for 30 years, retiring in May of 1978. After his retirement, Edward enjoyed gardening. visiting the farm in Brainard, and seeing family and friends. Edward is survived by many nieces and nephews, a few close neighbors and Cindi. He is preceded in death by his parents, brothers: Ted Dvorak, Hubert Dvorak, Joe Dvorak and Frank Dvorark and sisters: Georgia Bartek, Leotine Blowers, Pat Kaiser, Blanche Losthroh, Alice Tesinsky, Lydia Bejvancesky Mary Kucera and infant sister Dorothy Dvorak. Memorials may be given In Care of the Family.

Edward Dvorak, 93, of Omaha died Saturday, February 19, 2011 in Omaha. Funeral Services will be held at 2:00 pm Wednesday, February 23, 2011 at Holesovsky Mortuary in Brainard with Pastor Glenn Hubbard officiating. Visitation will be one... View Obituary & Service Information

The family of Edward Dvorak created this Life Tributes page to make it easy to share your memories.

Send flowers to the Dvorak family.