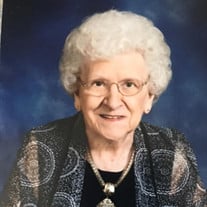 Edith M. Alt, 90, of Shelby, died Sunday, October 20, 2019 at Faith Regional Health Services in Norfolk. Memorials: Aquinas High School or Sacred Heart Church, Shelby Edith was born in David City on December 17, 1928 to Joseph & Marie(Voboril)Palik. She attended local country grade school, and two years at Dwight Assumption before graduating from David City High School in 1946. After graduation, she taught at District 90, a one room schoolhouse, for two years. On January 27, 1948, she married Mark Alt at St. Mary's Catholic Church in David City. Four children were born to this union. They lived on the farm north of Shelby until moving into town in 1988. She was a member of Sacred Heart Church and St. Ann's Guild, American Legion Auxiliary, and Shelby Project Club. Edith was a cottage seamstress for Designers Inn for over 37 years. She enjoyed playing Bridge, cooking, embroidery, gardening and spending time with family and friends. Edith is survived by her children, Cindy (Steve) McCawley of The Colony, Texas, Joan (Ron) Gerard of Omaha, and Chris (Mary) Alt of Norfolk, NE, 10 Grandchildren, 16 Great-grandchildren, one brother: Vic Palik of David City and one sister: Lucille Alt of Shelby. She was preceded in death by her parents, her son, Gary in 1998, husband, Mark in 2016, and two brothers.

The family of Edith M Alt created this Life Tributes page to make it easy to share your memories.