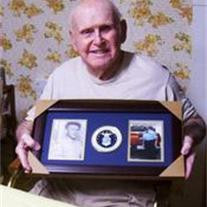 Earl Benson, 89, of David City, died Tuesday, October 11, 2011 at the Fairview Manor in Fairmont, NE. Memorial Services and military honors will be held in Colorado with those arrangements made by his daugther, Jill Nordquist. Earl Benson was born on July 27, 1922 to John Henry and Hazel Benson in Unionville, Hartford, CT. He was an U.S. Airforce retiree where his duties included ball-turret gunner during WWII until his crew's B-17 was downed by German Fighters and he was held prisoner-of-war for 25 months. He remained in the military twenty years, then worked in Civil Service at the National Bureau of Standards for eleven years. His legacy will be carried on future generations throught his true life story "Out Of The Turret And Into Hell", authored by his wife Vicky (V. Elaine Benson). Upon retiring from NBS, he became a supervisor for Boulder, Colorado's Regional Transportation District. Earl married Vicky E. Sampson/Stevens on July 27, 1980 in Marina California. He is survived by his devoted wife of more than thirty years, Vicky of David City; his daughter: Jill(Michael)Nordquist of Longmont, CO; two loving step-sons, Mark (Karla)Stevens of Fort Lupton, CO; Matthew Stevens of Colorado; two loving step-daughters: Deneen(Dean)Buresh of David City, Linda Flowers of Lafayette, CO; one brother: Robert Benson of S. Windsor, CT; 13 grandchildren; 6 great-grandchildren; many nephews, nieces, great and great-great nephews, nieces and wonderful friends. He was preceded in death by one half-brother: Kenneth Reals; one half-sister Shirley Balfour, five sisters: Henriette, Edith, Alice, Helen and Charlotte; six brothers: Howard, Edward, John, Ernest, Bernard and Charles; one step-daughter: Rose Marie Straw and former wife of thirty-three years: Juanita Frances Robinson Benson. Memorials may be given in care of the family.

Earl Benson, 89, of David City, died Tuesday, October 11, 2011 at the Fairview Manor in Fairmont, NE. Memorial Services and military honors will be held in Colorado with those arrangements made by his daugther, Jill Nordquist.... View Obituary & Service Information

The family of Earl Benson created this Life Tributes page to make it easy to share your memories.

Send flowers to the Benson family.