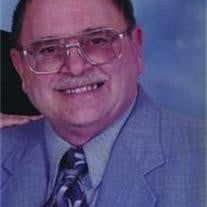 Duane J. Zegers, 70, of Octavia, died Tuesday, September 18, 2012 at Methodist Hospital in Omaha. Funeral Mass will be Saturday, September 22, 2012 at 10:00am at Presentation Catholic Church(Marietta), rural David City with Fr. Joseph Steele as celebrant.  Burial will be in the church cemetery. Military Honors will be performed by Kregger Legion Post #125 & VFW Post #5814. Viewing will be Friday, from 4-7pm followed by a parish wake service and a Knights of Columbus Rosary at 7pm all at the church.  Memorials In LIEU OF FLOWERS:  Masses or The Aquinas Building Campaign. Duane J. Zegers was born on August 5, 1942 near Garrison, Nebraska to Harold and Cecilia(Sauser) Zegers. He graduated from Marietta High School in 1960. From there, he joined the Army reserve in 1963 and served until 1970. During that time Duane married Jeannie Hladky on May 15, 1965 at St. Mary's in David City. One daughter was born to this union. In the early years of Duane's adulthood he worked at Farmer's Co-op in David City, at Wright Feedmill, at Eschilman Electric, then as a farmer. At some point, he quit farming and went to work at QC Supply in Schuyler for 18 years from where he retired. He then came out of retirement and returned to farming where he worked for many more years. Duane was a member of Presentation Catholic Church where he was an Acolyte and a member of the choir. He was also a member of Kregger Legion Post #125, Eagles Club of Schuyler, Knights of Columbus 4th Degree Tihen Counsel, Knights of Columbus Men's Choir, and he served as the Village Chairman of Octavia for 40 years. Duane enjoyed gardening, farming, watching his grandson bowl, doing Sudoku puzzles, coffee with his coffee group in Schuyler, and computer games. He especially loved singing in choirs. He is survived by his wife, Jeannie; Daughter, Kim(Jay) Franklin of Omaha; Sister, Connie Sabatka of Weston; Brothers, Eugene Zegers of Octavia, Ronald(Christine) Zegers of Henderson, NV, and Robert(Deanna) Zegers of Bellwood; 1 grandson, Michael Franklin and several nieces and nephews. Duane is preceded in death by his parents, one brother: Dennis Zegers, one sister-in-law: Elaine Zegers, and one brother-in-law: Darrell Sabatka.

The family of Duane Zegers created this Life Tributes page to make it easy to share your memories.

Send flowers to the Zegers family.