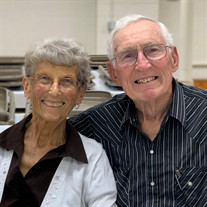 Doris A. Shonka passed away at the Butler County Health Care Center in David City on Tuesday, January 4, 2022, five days after her beloved husband, Ernie. A Funeral Mass for both Ernie and Doris will be held on Thursday, January 6, 2022 at Immaculate Conception Church, Ulysses, Nebraska. Burial will be at 2:00pm at St. Mary's Cemetery, Ulysses. The family has requested that IN LIEU OF FLOWERS, PLANTS, and STATUES, memorials be directed to Aquinas Guardian Angel Fund, Immaculate Conception Church, or Sisters of the Diocese of Lincoln. Doris Ann (Malovec) Shonka was born on December 6th, 1941 on a farm near Brainard Nebraska. She was the second child of Louis and Frances (Zegers) Malovec. She attended Holy Trinity grade school in Brainard and graduated from Brainard high school in 1959. After high school she worked at First National Bank in David City from 1959 to 1963. Doris was united in marriage to Ernie Shonka Jr. on May 26, 1962 at Immaculate Conception church in Ulysses Nebraska. They raised 6 children near Shelby Nebraska and moved to the homeplace to farm near Surprise Nebraska. Doris was a homemaker and farmed full time. She was a member of the Altar Society, Catholic Daughters and Deanery. She loved flowers, canning, baking and bird watching. She loved following all of her children and grandchildren's activities. She enjoyed vacations with all her family. Doris is survived by: sons Keith (Karen), Bellwood; Dave (Renee) and Gregg (Amy), Lincoln; Chris (Veronica), of Fort Collins, CO; daughters Kathy (Mike) Beran and Sherri (Jason) Suelter, Lincoln; sisters-in-law Marilyn Chemelka, Betty (Alvin) Wellman, Delores Stuhr, Aggie Shonka; 26 grandchildren, 7 great grandchildren, and many nieces and nephews. She is preceded in death by her husband, Ernie, son Kenny, parents Louis and Frances Malovec, brother Don Malovec, sister Janet Malovec, and brothers-in-law Willie Shonka, Mike Birkel, Tony Stuhr, and Jimmy Chmelka

Doris A. Shonka passed away at the Butler County Health Care Center in David City on Tuesday, January 4, 2022, five days after her beloved husband, Ernie. A Funeral Mass for both Ernie and Doris will be held on Thursday, January 6, 2022... View Obituary & Service Information

The family of Doris A Shonka created this Life Tributes page to make it easy to share your memories.

Doris A. Shonka passed away at the Butler County Health Care...

Send flowers to the Shonka family.