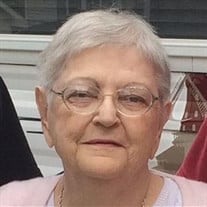 Donna Lou Michael, 87, passed away Monday, September 26, 2016, at Unity Point Methodist Medical Center in Des Moines, Iowa. Donna was born October 9, 1928, in Havelock, NE, to Frank and Lola Mae (Menking) Vybiral and raised in David City, NE. She attended school in David City and graduated from David City High School in May of 1945. Upon graduation, she worked for the Butler County Superintendent of Schools and Lincoln Telephone and Telegraph Company. On February 25, 1948, she married Richard F. Michael at St. Mary’s Cathedral in Lincoln, NE. They resided in Lincoln and Norfolk, NE where they raised their four children. In May of 1990, they retired to Bella Vista, AR. Donna relocated to Grimes, IA to be close to her daughter in 2011. Donna was a homemaker and enjoyed playing (and winning at) bridge, reading, dancing, traveling with her husband, golf, English Tea in the afternoon and spending time with friends and family. She was also an active member of the Catholic Church and participated in many parish organizations and functions. Donna is survived by her children, Martin Michael of San Francisco, CA, Christine Michael of Appleton, WI, Anthony (Patti) Michael of Katy, TX and Maureen (Berton) Whited of Dallas Center; grandchildren Jennifer Michael (Jay McCleary), Amanda Michael, Derick Whited, Jason Whited; great-grandchildren Abigail and Bricen McCleary; brother and sister-in-law Leon and Florence Michael, brother-in-law Gilbert Gonzalez and many wonderful nieces and nephews. Inurnment for Donna and her husband Richard will follow at St. Peter and St. Marys Catholic Cemetery near Bellwood, NE. In lieu of flowers, memorial contributions may be made to the David City Public Library

The family of Donna Lou Michael created this Life Tributes page to make it easy to share your memories.

Send flowers to the Michael family.