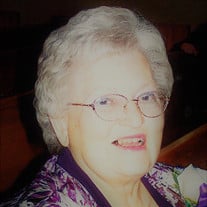 Donna Rae Allen, 81, of David City, passed away on December 21, 2016 at David Place in David City. Donna was born at home in David City to Fenton Aldridge Scribner and Edith Pearl (Kilgore) Scribner on May 27, 1935. She attended school at... View Obituary & Service Information

The family of Donna Rae Allen created this Life Tributes page to make it easy to share your memories.

Send flowers to the Allen family.