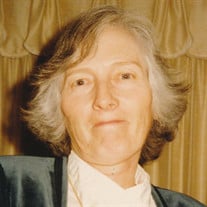 Donice I. Bruner, widow of Richard, passed away on Friday, June 2, 2017 at Eastmont Towers in Lincoln, Nebraska Per Donice's wishes, cremation will take place. Memorials: In Care of the Family Donice was born on April 16, 1924 to George W. and Anna L. (Polak) McNaught at Benkelman, Nebraska. She grew up in on the ranch near Benkelman with her parents, two sisters, Marian and Jean and brother, Clinton. She attended a one room school until going to high school, graduating from Benkelman High in 1941. Donice then attended Colorado Women's College for a year and then went to the University of Nebraska where she earned her teaching degree in Home Economics. She taught Home Economics at David City High School for many years. She married Richard J. Bruner on September 4, 1949 at David City, Nebraska. They lived on the farm near David City and raised registered Angus Cattle. She was active in the community and with many organizations. She was a past president of the Farm Bureau, and a member of Eastern Star, the Cow Bells, The Nebraska Beef Association and St. Luke's United Methodist Church, the Sunshine Community, Eastern Star, and belonged to the Red Hat Club. She also was an organic gardener, raising goats and providing goat's milk to many people who had dairy allergies. Later in life, Donice had fun dressing up as a clown and helping with openings and school functions. She enjoyed baking, sewing, musicals and plays and she and Richard loved to travel. She also loved to go to auctions and garage sales and at one time, raised her own bees and honey. Donice is survived by her sons: David (Barb) Bruner of Lincoln, Kevin Bruner of Russellville, AR, and Daughter: Kathy (Darin)Engle of Bellwood. 7 Grandchildren and 10 Great-grandchildren. She was preceded in death by her parents, her husband, Richard in 2009, sisters, Marian Hatfield and Jean Reese and brother, Clinton.

Donice I. Bruner, widow of Richard, passed away on Friday, June 2, 2017 at Eastmont Towers in Lincoln, Nebraska Per Donice's wishes, cremation will take place. Memorials: In Care of the Family Donice was born on April 16, 1924 to George... View Obituary & Service Information

The family of Donice I. Bruner created this Life Tributes page to make it easy to share your memories.

Donice I. Bruner, widow of Richard, passed away on Friday, June...