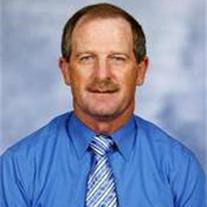 Donald A. Maxson, 55, of Brainard, died Tuesday, March 6, 2012 at BryanLGH East Hospital in Lincoln. Funeral Services will be at 10:30am, Saturday, March 10 in Holy Trinity Church, Brainard with Fr. Matthew Eickhoff officiating. Burial will be at 2:00pm in the Oak Creek Cemetery, Raymond, NE. Per family wishes, the casket will be closed. A memorial book will available to sign until 5pm Friday at Chermok Funeral Home, David City and beginning at 9:00am on Saturday, at the church. Donald Maxson was born on October 13, 1956 at Seward, Nebraska to Eugene and Lois(Lipman)Maxson. He graduated from Raymond Central High School in 1975 and went on to earn a Bachelors Degree in Education from UNL in 1979. Don began his teaching career at Polk High School after graduation, he then moved to East Butler in 1983 where he taught business and math and coached girls volleyball, boys basketball, and baseball. He was also a referee for many basketball and volleyball games and involved in many school activities. Don was also involved in the Butler County Fair Board as president as well as the State Fair Board. He enjoyed running,biking, collecting antiques and Nebraska football memorabilia and working with livestock,especially sheep. He owned/ran the Brainard Cafe for close to 15 years. Don was also on the Brainard Volunteer Fire Department for the past 27 years with most of those acting as treasurer. Don is survived by his Brother: Terry (Jeri) Maxson of Malcolm, NE; Sisters: Kathy (David) Jakoubek of Raymond, NE, Cindy(Jerry) Otto of Ceresco, NE, and Jeannie (Ray) Lamborn of Lincoln, NE; Special Friends: Dusty (Rachel) Romshek, Mandi (Nick) Topil and Patti Romshek; Aunts and Uncles: Lyle (Carol) Maxson, Gerald (Joan) Maxson, Dale (Lorena) Maxson, Evelyn Lipman, and Lynn (Mary) Maxson; several nieces, nephews, and cousins. He was preceded in death by his parents, grandparents and two brothers: David and Dennis Maxson. In lieu of flowers, memorials may be given in Don's name to the Brainard VFD; Butler County Ag Society or East Butler FFA Alumni Scholarship Fund.

The family of Donald Maxson created this Life Tributes page to make it easy to share your memories.

Send flowers to the Maxson family.