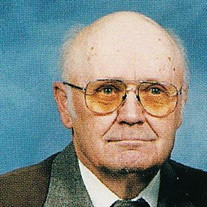 Donald Kroft, 84, of Rising City, was born at David City, NE on January 29, 1933 to Gerald and Alice(Miller) Korft. He passed away December 25, 2017 at Bryan Medical Center, Lincoln, NE. He went to grade school at District 60 and graduated from high school at David City High School. He was a 4-H member and FFA member. Following high school he farmed with his father. In 1953, he was drafted into the U.S. Army and served in Korea and Japan. Returning home in 1955, he started to farm his Grandmother's farm at Rising City and lived there for the remainder of his life. He farmed and raised sheep. In 1955, he met Viola Crook and they were married on August 26, 1956. They had two children, Sara(Mark) Schroeder of Roca, NE and Joel(Louise) Kroft of Seward, NE. There are six grandchildren: Justin(Candice) Schroeder, Ashley Schroeder, Emily Schroeder, Michaela Kroft, Marissa Kroft, and Melaina Kroft. He was so proud of each of them. Don also worked for the Farmers Co-op Business Association in David City for 10 years and Osceola Implement for one year as a mechanic. He opened his own auto and farm equipment repair shop in 1973 and ran it for 35 years. He retired from farming in 2015. He enjoyed his woodworking shop and made many pieces of furniture and small items for family and friends. He also enjoyed camping with his family. Donald is survived by his wife: Viola; his children and grandchildren; nieces and nephews; brothers: David(Susan) Kroft, of Chattanooga, TN, John (Avis) Kroft, of Grand Juntion, CO, Gary(Marilyn) Kroft, of Grand Junction, CO, and Randy(Linda) Kroft, of Bellwood, NE. He is preceded in death by his parents. Memorials can be made to the family.

Donald Kroft, 84, of Rising City, was born at David City, NE on January 29, 1933 to Gerald and Alice(Miller) Korft. He passed away December 25, 2017 at Bryan Medical Center, Lincoln, NE. He went to grade school at District 60 and graduated... View Obituary & Service Information

The family of Donald Kroft created this Life Tributes page to make it easy to share your memories.

Send flowers to the Kroft family.