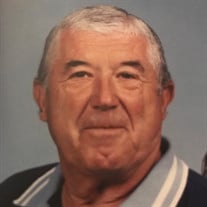 Donald J. Behne, 90, of Brainard, passed away January 17, 2018 at St. Joseph's Villa in David City. The visitation and Rosary service for Monday evening has been cancelled due to weather conditions. The events will continue tomorrow as planned. The Rosary service will be at 10am, and the funeral will be right after all at Holy Trinity Catholic Church in Brainard. Viewing will begin at 10am. Memorials can be made to Family Wishes. Donald Joseph Behne was born to George and Mary (Liska) Behne on April 8, 1927 on a farm north of Brainard. Don graduated from Dwight Public School in 1944. Don enlisted in the Army and served in the Korean War from 1951 to 1952. He was united in marriage to Martha (Zavodny) on September 22, 1953 at Holy Trinity Catholic Church in Brainard, NE. To this union six children were born. Don lived on the farm until 2016 when he moved to St. Joseph's Villa in David City. Don farmed, drove a school bus, served on the Oak Creek township board, drove a semi that hauled livestock to the Omaha Stockyard, drove for the Schiltz Beer Company, and Frontier Coop in Brainard. Don was a member of the Brainard Fire Department, Holy Trinity Catholic Church, Knights of Columbus, and the Brainard American Legion Rejda Post 273 for 64 years. Don is survived by six children: Donald (Patricia) Behne of Florida, Duane Behne of David City, Doug (Tiffany) Behne of Columbus, Darlene (Tom) Trojan of Dwight, Denise (Nathan) Schroeder of Indiana, David Behne and friend Sharon of Brainard; Brother: Dean Behne of Wilber; Sister-in-laws: Doris Behne of Hawaii, Genevieve Behne of Brainard, and Helen Zavodny of David City; 12 grandchildren; 7 great-grandchildren; 1 great-great grandchild; and many nieces, nephews and friends. Don is preceded in death by his wife: Martha in 2015; his parents; two brothers: Ernest and George Behne ; sister in law: Mavis Behne; and daughter-in-law Cindy Behne

Donald J. Behne, 90, of Brainard, passed away January 17, 2018 at St. Joseph's Villa in David City. The visitation and Rosary service for Monday evening has been cancelled due to weather conditions. The events will continue tomorrow as planned.... View Obituary & Service Information

The family of Donald J. Behne created this Life Tributes page to make it easy to share your memories.

Send flowers to the Behne family.