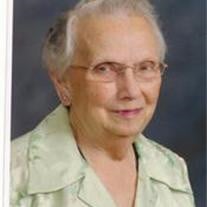 Dolores Yvonne Novell, 84, of David City, was suddenly called home to be with Jesus, on Sunday Oct. 7 2012 at Butler County Health Care Center. Funeral Services will be 10:30am, Friday, October 12, 2012, at Redeemer Lutheran Church, David City with Pastor David Palomaki officiating. Burial will be in the David City Cemetery. No visitation or viewing. Family has requested memorials IN LIEU OF FLOWERS to Redeemer Lutheran Church Dolores was born on Sept. 9, 1928 to Adolf and Marie (Janky) Rathjen, on the family farm near Ulysses, Nebraska. She was the oldest of six children. Dolores graduated from David City High School in 1947. On November 16, 1947, she married DeWayne O. Novell at Zion Lutheran Church, Garrison, NE. To this union, four children were born. In their early years of marriage they farmed just west of David City. After moving into David City in 1960, Dolores did alterations and sewing and was a sales rep for Studio Girl Cosmetics. She later worked part-time for many years for the Morloks at Coast-to-Coast Hardware. In the spring of 1971, DeWayne and Dolores opened up a grocery store in Rising City and moved the family there. They resided there for the next 27 years together. After DeWayne’s death, Dolores moved back into David City in 1999, just 1 block away from the home where she raised her family. Dolores loved to sew and craft. She kept sewing, quilting and crafting until the last few years of her life. Dolores was a member of the Redeemer Lutheran Church since 1961. She was active in church including teaching Sunday school and being a member of the LWML. She was also an active member of the VFW auxiliary, including serving in office. Dolores was preceded in death by her husband DeWayne, a son Calvin, and a granddaughter, Alison Shanahan. She was also preceded in death by her parents Adolf Rathjen, Marie Rathjen Struebing, and step-father Joseph Struebing, a sister LaVerne Rathjen, and a brother Robert Rathjen. She is survived by: son Orville (Bobbi) Novell of Grass Valley, CA and their 3 children, 10 grandchildren and 4 great-grandchildren; daughter Voni (Bob) Shanahan, of Billings, MT and their 2 daughters, and 4 grandchildren; and son Delwinn (Ginny ) Novell of Holbrook, AZ and their 2 sons and 1 grandson. Dolores is also survived by 2 sisters, Cherie DeTurk of Kearney and Darlene Soukup of Carson City , NV and a brother, David Rathjen of Shelby and numerous nieces and nephews.

The family of Dolores Novell created this Life Tributes page to make it easy to share your memories.

Send flowers to the Novell family.