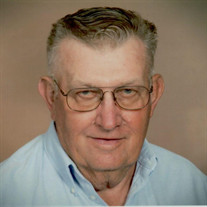 Dennis Louis Riha, 78, of David City passed away on Saturday, November 21, 2020 at Bryan East Medical Center in Lincoln. IN LIEU OF FLOWERS, PLANTS AND STATUES: MEMORIALS MAY BE GIVEN IN CARE OF THE FAMILY. Following the state COVID-19 guidelines and due to increasing COVID positive numbers, we will comply with social distancing seating and limited room capacity at the Rosary Service and Funeral Mass. When church reaches capacity seating, no entry will be allowed. Masks WILL BE required for entry into the church. The Funeral Mass & Rosary will be live-streamed beginning at 9:55 am to our Facebook page: https://www.facebook.com/ChermokFuneralHome The family will not be hosting a funeral lunch following the burial. Dennis Louis Riha was born on October 21, 1942, in David City, Nebraska to Raymond F. and Lucille M.(Bouc) Riha. He attended West Olive School District to grade 6 and later St. Mary's School. When Dennis was 7 years old, he was watching his dad and two other men load wheat out of a grain bin where he had climbed to the top. He slipped and fell into the bin of wheat. Quick thinking of his father and artificial respiration by the other men, they were able to save Dennis's life. Mr. Riha pulled the boards off the wooden bin to extricate Dennis from the bin. Dennis was taken to be examined by a doctor and then released. Much of his life he did mechanic work and could repair just about anything. He worked for George Janak Repairs in Rising City and later as an electrician for Eschliman Electric in David City. His passion was farming. He joined the Nebraska National Guard in 1963 and was a member until 1968. On June 15, 1968, he married Aldeen Niemann and together they raised one son, Jerod while continuing their farm life. On July 10, 1968, while working for Eschliman Electric, he fell from a 30 foot power pole while hooking up an irrigation well, which resulted in lifelong medical trips to doctors and surgeries, but through it all, he loved farming. He enjoyed traveling, auto racing, fishing, restoring old tractors, and watching his favorite Western, "Gunsmoke". His love for Hart-Parr Oliver and White Tractors, which his father and grandfather owned and farmed with, resulted in a collection of them of which he was so proud of and which his son still farms with today. He and Jerod would show many of the tractors at antique tractor shows in Nebraska and Iowa. He was a member of St. Mary's Catholic Church, the Knights of Columbus and FCSLA (formerly Catholic Workman). Dennis is survived by his wife of 52 years, Aldeen, Son, Jerod(Meridith), brothers, Gary(Nancy)Riha, John(Mary)Riha, sister, Lucille "Susie" (Ron) Behrens, Nephews, Chris(Rhonda) Riha, Jeff(Lisa)Riha, Brody(Risa)Riha, Justin Riha, David(Nancy)Boden, Dennis(Nicky)Boden, Mike(Marian)Lowry, Chris(Robyn)Lowry, Nick Brichacek, Nieces, Barb(Chuck) Brandenburgh, Jeanne(Steve)Sheridan, Jill(Ryan) Worrell, Rachelle(Craig)Svoboda, and Jennifer(Dan) Hutchinson, sisters-in-law: Joan Riha, Bonnie(John) Brichacek, Sharyn Lowry, and Keri(Bob) Rachel. He was preceded in death by his parents, an infant son, James Dennis Riha, brother, Raymond J. Riha, parents-in-law: Paul & Josephine Niemann and sister-in-law, Pauline Niemann Prochnow.

Dennis Louis Riha, 78, of David City passed away on Saturday, November 21, 2020 at Bryan East Medical Center in Lincoln. IN LIEU OF FLOWERS, PLANTS AND STATUES: MEMORIALS MAY BE GIVEN IN CARE OF THE FAMILY. Following the state COVID-19 guidelines... View Obituary & Service Information

The family of Dennis L Riha created this Life Tributes page to make it easy to share your memories.

Dennis Louis Riha, 78, of David City passed away on Saturday,...

Send flowers to the Riha family.