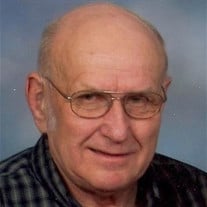 Denis J. Vrbka, 85, of Brainard, died Sunday, October 18, 2015 at St. Joseph's Villa in David City. Memorials: In Care of the Family Denis J. Vrbka was born April 15, 1930 on the family farm west of Brainard to John and Helena (Rolenc) Vrbka. He went to School District 35 and Holy Trinity in Brainard through eighth grade. He graduated from Dwight Assumption High School in 1947. Denis was a veteran of the Korean War, serving from 1952 to 1953 in Korea. On Aug. 18, 1954, he married JoEllen Hakenkamp and they moved to the family farm near Brainard. Denis was devoted to farming and spent his life in that career. A lifetime member of Rejda Post 273, Denis also belonged to the Brainard Fire Department and Brainard Rural Fire Board. He served on the board of directors for the Butler County Public Power District, Holy Trinity Church, Farmers Cooperative, and Farmers Union Cooperative of Brainard. Denis left full-time farming in the spring of 1995. JoEllen, who devoted more than 40 years to health care in Butler County, timed her retirement to coincide with her husband’s. In retirement, the couple traveled including elder hostels in the United States and Canada. They toured the Czech Republic, where they made lifelong friends. While they were on a trip to Ireland and England, the 9/11 attack on the United States occurred. Later, the couple also traveled with their grandchildren, including trips to Ohio and various other locations. Denis loved spending time with his grandchildren, whether it was at home, at holidays or traveling. At home in retirement, Denis and JoEllen kept busy in various ways. They belonged to Holy Trinity Catholic Church in Brainard and took part in many parish activities. Survivors include a daughter: Colleen (Dennis) Lux of Omaha; two sons: Tom of Plattsmouth and Doug (Nancy) of Brainard; nine grandchildren: Rachel and John Vrbka; Andrew (Courtney) Lux, Claire and Charlie Lux; Joel (Cassie) Vrbka, Julie Vrbka and fiancé Clayton Radke, Micaiah and Matthew Vrbka; a great grandson, Asher Radke; a great granddaughter, Aila Jo Lux; a sister, Genevieve Behne; four brothers-in-law and sisters-in-law: Dick (Nancy) Hakenkamp, Mark (Karen) Hakenkamp, Mike (Mary) Hakenkamp and Don (Marta) Ogle; numerous nieces, nephews and great nieces and great nephews. He was preceded in death by his wife, JoEllen, who died earlier this year on Feb. 27; his parents; an infant granddaughter, Kristy Jo Lux; and a brother-in-law, Ernest Behne, sister-in-law: Phyllis Ogle.

The family of Denis J Vrbka created this Life Tributes page to make it easy to share your memories.

Send flowers to the Vrbka family.