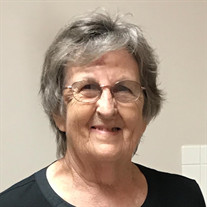 Delores Veskrna of Lincoln, formerly of David City, died Sunday, May 15, 2022 at Old Cheney Rehabilitation Center in Lincoln. In lieu of flowers, plants and statues: Memorials may be directed to family wishes. Per Delores wishes, there will... View Obituary & Service Information

The family of Delores Veskrna created this Life Tributes page to make it easy to share your memories.

Send flowers to the Veskrna family.