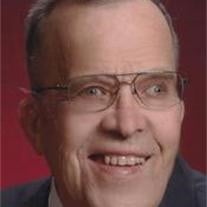 David E. White, 68, of David City, formerly of Ulysses, died Monday, July 15, 2013 at David Place in David City. Funeral Services will be 11:00am on Wednesday, July 17, 2013 at St. Luke's United Methodist Church, David City with Pastor Mark Schutt officiating. Burial will be at 2:00pm at the Ulysses Township Cemetery. Family will greet friends on Tuesday, from 5-7pm at Chermok Funeral Home. Additional viewing will be Wednesday, from 10-11am at the church. Memorials In Care of the Family. David E. White was born on September 4, 1944 at David City, Nebraska to Burton and Una(Sleight)White. He attended District 31 grade school and graduated from David City High School in 1963. He worked for many years as a pivot repairman for White and McGowen. Dave lived in the Ulysses area for most of his life until moving to Heartland Park in Seward in 2003. He eventually moved to St. Joseph's Court in David City and was a recent resident of david place until his death. He enjoyed shopping, reading, researching topics, especially genealogy, scrapbooking, photography, an avid Husker Fan and Elvis memorabilia collector. He was a past Valentine King and when able, enjoyed going to watch his nieces and nephews play sports. Dave was a member of the United Methodist Church, and past member of the Ulysses Fire Department and Ulysses Jaycee Club. David is survived by his brother: Ken(Delores)White of Ulysses, Sister-in-law: Janice White of Seward, Nieces and Nephews: Doug(Diane)White of Ulysses, Nancy(Mike)Hula of Raymond, Mike(Jenny)White and Jon(Angie)White both of Ulysses, and Shannon(Frank)Prochaska of Abie. He was preceded in death by his parents, one brother, Glenn White and niece, Susan White.

The family of David White created this Life Tributes page to make it easy to share your memories.

Send flowers to the White family.