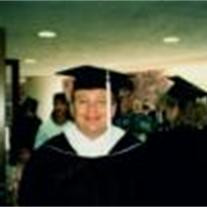 David Michael Walden passed away at the Federal Heights Nursing Home and Rehabilitation Center in Salt Lake City, UT June 23, 2010. His death was attributed to complications from diabetes. David was born on November 6, 1947 to Blake C. and Charlotte A. (Brown) Walden in Omaha, NE. He graduated from Holstein High School in Holstein, IA in 1965 where he was active in football, wrestling, vocal music and band. David graduated from Iowa State University in 1969 with a B.S. in Zoology and Bacteriology and enlisted in the U.S. Navy in December 1969 where he trained as a Hospital Corpsman. Dave was stationed at Bremerton Naval Hospital and the Naval Hospital on Guam. Following his discharge from the Navy David taught school and attended the University of Guam, receiving a M.A. in Behavior Science. Dave eventually settled in the Salt Lake City area and earned a masters degree from BYU in 1990 In addition to teaching American History at Salt Lake Community College, David authored, edited and/or published a number of business and personal histories. David was active in the local Republican Party and held a strong faith in the LDS Church. He was preceded in death by his parents and grand parents and a nephew, Matthew Bryan Walden of Omaha, NE. He is survived by his brother, Kim (Susan) Walden of Columbus, NE, nephews Jeffrey of Brooklyn, NY, Michael (Steven) of Lincoln, NE, niece Stephanie (Marty) Wurdeman and great-nieces Kaitlin Walden of Orlando, FL, Matthew Walden of Omaha and Connor and Sophie Wurdeman of Omaha. Graveside services will be Friday, July 2, 2010 at 3:00pm in the David City Cemetery. Viewing will be Friday, from 2-2:30pm at Chermok Funeral Home, David City. Memorials may be given In Care of the Family.

David Michael Walden passed away at the Federal Heights Nursing Home and Rehabilitation Center in Salt Lake City, UT June 23, 2010. His death was attributed to complications from diabetes. David was born on November 6, 1947 to Blake C.... View Obituary & Service Information

The family of David Walden created this Life Tributes page to make it easy to share your memories.

David Michael Walden passed away at the Federal Heights Nursing...

Send flowers to the Walden family.