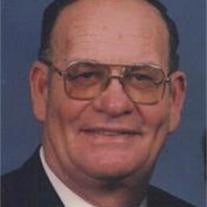 Darrell L. Shipley, 78, of Ulysses, died Tuesday April 3, 2012 at David Place in David City. Funeral Mass will be Monday, April 9, 2012, 10:30am at Immaculate Conception Church, Ulysses with Fr. Raymond Jansen and Fr. Jim Schmitt concelebrating. Burial will be in the Ulysses Catholic Cemetery. Viewing will be Sunday, 3-5pm at Chermok Funeral Home, and after 6pm at the church followed by a 7pm parish rosary. Additional viewing will be Monday, 9:30-10:30am at the church. Memorials: Masses or In Care of the Family. Darrell L. Shipley was born on May 4, 1933 to Leonard "Spike" and Rose(Korinek)Shipley on the farm in Seward County. He graduated from Ulysses High School in 1951. He entered the US Army in May of 1953 and was discharged in April of 1955. Darrell married Rita Timoney on May 26, 1955 at Immaculate Conception Church in Ulysses, eight children were born to this union. Darrell was dedicated to providing for his family by working long hours and often times seven days a week. He worked at Hughes Brothers Inc. as a carriage operator and moved up to foreman. During that time, he also started work at Henningsen Foods, so Rita could return to school and get her teaching degree. He retired from Hughes Brothers after 42 yrs, and later retired from Henningsen Foods after 33 yrs of service. He also delivered the Omaha World Herald in the Ulysses area, served Meals on Wheels, as well as coaching various softball and baseball teams in Ulysses, was a past town administator of Ulysses, served as a board member of Hughes Brothers Credit Union, and served on the council of administration at Aquinas Schools. He also enjoyed helping out area farmers throughout the year. Darrell was a huge Yankees Fan, enjoyed Husker baseball and especially liked going to his kids and grandkids sporting events. He was a member of Immaculate Conception Church of Ulysses, and the VFW in Seward. Darrell is survived by his wife, Rita, children: Deb(Ken)Navratil of Tilden, Ne; Kathy(Mark)Kinnett of Ulysses; Mary Jo Rupert of Lincoln and friend Dan Leininger of York; Terri Shipley of Newport News, VA; Tim(Geri)Shipley of Lincoln; Dr. Rob(Jami)Shipley of Dayton, Iowa; Jenny(Mike)White of Ulysses; and Chris(Danielle)Shipley of Lincoln; 15 Grandchildren: Tony(Kyra) and Matt Navratil; Katie and Molly Kinnett; Jameson and Jared Rupert; Morgan Shipley; Samantha(Tim)Young, Zoey, Carson, and Ryann Shipley; Becky, Mitch, and Garrett White and Calvin Shipley. Four great-grandchildren: Alivia, William and Sophia Navratil,and Elliott Young. Two brothers: Ron(Brenda)Shipley of David City and Jim(Sandy)Shipley of Blythe, CA. Darrell was preceded in death by his parents and one grandson: Jonathan Darrell Rupert.

The family of Darrell Shipley created this Life Tributes page to make it easy to share your memories.

Send flowers to the Shipley family.