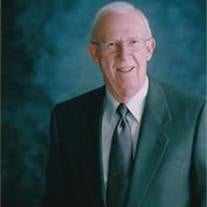 Dale H. Onnen, 81, of rural David City died Thursday April 5, 2012 at his home on the family farm. Funeral Services will be Tuesday, April 10, 2012 at 10:30am in Redeemer Lutheran Church, David City with Pastor David Palomaki officiating. Burial will be in the David City Cemetery. Viewing will be Monday, 4-7pm at Chermok Funeral Home; and Tuesday, one hour before services at the church. Memorials In Care of the Family. Dale H. Onnen was born on May 23, 1930 in David City to Herman A. and Marie D.(Siffring)Onnen. He graduated from David City High School and has lived on and worked the family farm all of his life. He was a past member of the Garrison School Board, the Union Township Board, the Feeder Breeder Organization and Frontier Co-op. He was an active church worker for Zion Lutheran Church, Garrison and Redeemer Lutheran Church, David City. He married Jean Root on July 1, 1951 at Zion Lutheran Church, Garrison, NE and three daugthers were born to this union. Dale was a dedicated husband, father, grandfather, great-grandfather and friend. He spent his life helping others whenever and wherever he could. He was a true care-giver. Survivors include his wife: Jean, Daughters: Cindy(Wayne)Divis of Dorchester, Shelley Lewis of Archer City, Texas, and Teri(Cliff)Prochaska of Columbus, Ne; 6 Grandchildren: Nikki Divis, Angie(Jason)Blacketer, Wayne Jr(Amy)Divis; Malinda(John)Crouse; Krissi(Rob)Johnson and Samantha(Nick)Ziemba; two great-grandchildren: Braden and Kale Divis. Dale was preceded in death by his parents, one brother, Richard, sisters and brothers-in-law::Lucille and Robert Hutchinson and Elinor and Donald Wondercheck; one grandson: Kenneth "Matthew" Lewis.

The family of Dale Onnen created this Life Tributes page to make it easy to share your memories.

Send flowers to the Onnen family.