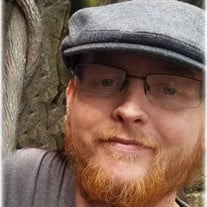 Corey Ostdiek, 35, passed away on Sunday , December 26, 2021 in Rochester, Minnesota. Corey's Family asks that IN LIEU OF FLOWERS, PLANTS AND STATUES: Memorials may be given In Care of the Family. Thank you for honoring their request. Corey Martin Ostdiek was born on July 4, 1986 to Frank and Helen(Tillemans) Ostdiek in Beloit, Kansas. He attended Mankato Elementary School and after his family moved to David City, he attend Aquinas High School, graduating in 2005. He went on to Hastings Community College, starting out in Culinary Arts, but later earning an Associate’s Degree in Business. Corey married Sara Joy Hutson on June 13, 2009. Two sons were born to this union. He worked at the Walmart in Hastings and continued his employment there for 15 years until his death. He always enjoyed working with the public and his Walmart associates in the Hastings store. Corey was an outgoing, social person, who was a friend to all. He was a member of the Boy Scouts of America while in school and later became a BSA leader of Pack 32, being active with his sons, Zachary, age 9 and Eli, age 6. He also enjoyed taking his boys fishing and spending quality time with them. His life focused on family, friends and his children. He also enjoyed golfing, cooking, grilling, baking and being an amateur chef whenever the occasion arose. He was also a big Husker Fan, following the teams through wins and losses. Corey is survived by his wife, Sara, Sons, Zachary Frank and Eli Wayne Ostdiek, mother, Helen Ostdiek of David City, brother; John Ostdiek and his daughter, Adele, sister, Chanda(Chris) Nelsen, and children: Addison, Haily & Tyler of Yankton, SD, several aunts, uncles and cousins. He was preceded in death by his father, Frank in 2010, grandparents, Irene & Herman Ostdiek and Joleta & Lyle Tillemans and uncles, Vern Ostdiek, and Clifford Tillemans.

Corey Ostdiek, 35, passed away on Sunday , December 26, 2021 in Rochester, Minnesota. Corey's Family asks that IN LIEU OF FLOWERS, PLANTS AND STATUES: Memorials may be given In Care of the Family. Thank you for honoring their request. Corey... View Obituary & Service Information

The family of Corey M. Ostdiek created this Life Tributes page to make it easy to share your memories.

Send flowers to the Ostdiek family.