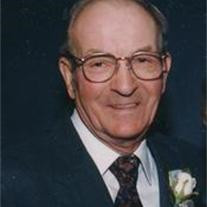 Clarence J. Roh, 87, of Abie, died Tuesday, September 4, 2012 at the Butler County Health Care Center in David City. Funeral Mass will be Saturday, September 8, 2012 at 10:00am in Sts. Peter and Paul Catholic Church, Abie with Fr. Ronald Homes officiating. Burial will be in the church cemetery. Viewing will be Friday, from 6-7pm, followed by a 7pm Parish Rosary and Wake Service all at the church. Refreshments will be served following the rosary in the church basement. Additional viewing will be Saturday from 9-10am at the church. Memorials may be directed to the Aquinas Endowment Fund or Sts. Peter and Paul Catholic Church. Clarence J. Roh was born on September 7, 1924 on the farm near Abie, Nebraska to James and Anna(Brezina)Roh. He graduated from South High School in Omaha and entered the US Air Force in August of 1943, serving his country as a top gunner on B-25's during WWII. He also served as a gunner and plane mechanic in the 345th division in Luzon. Clarence also occupied Japan after August of 1945. After his discharge from the Air Force, Clarence returned home and married Marie Vrana on April 20, 1948 at Sts Peter and Paul Catholic Church in Abie, Nebraska. Four children were born to this union. He loved to tell his stories from the war and was proud of his military service. He also enjoyed fishing, dancing, farming, raising his hogs and eating good Czech desserts. He spent many hours with his grandchildren and attended many sporting events. Clarence was a big Husker fan,a member of Sts. Peter and Paul Church, a 3rd Degree member of the Knights of Columbus, past volunteer fireman for the Abie VFD, and a member of the 500th Bombadier Group. He is survived by his wife, Marie, Daughters: Diane(Rich)Furasek of Lincoln and Peggy(Greg)Fiala of David City, 6 grandchildren: Todd(Anne Marie)Furasek; Jill(Justin)Jakub, Aaron Furasek, Meghan(Nathan)Jantzi, Justin Fiala and Kristine Fiala, 4 Great-grandchildren: Randi, Delani, and Zelli Furasek and Grant Jakub. Two sisters-in-law: Delores Roh and Margie Vrana, and several nieces and nephews. Clarence was preceded in death by his parents, one son: Gary, one daugher: Linda Roh, two great-grandchildren: Samuel and Marie Jakub, three brothers: James, Bill and Milton Roh; five sisters: Adeline Tajchman, Elsie Tomek, Helen Kucera, Agnes Semin, and Anna Janovy.

The family of Clarence J. created this Life Tributes page to make it easy to share your memories.

Send flowers to the J. family.