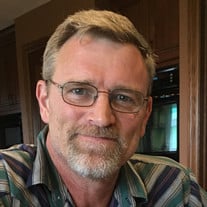 Christopher J. Vandenberg, 50, of David City died Tuesday, May 23, 2017 at his residence, near David City, after a valiant battle with cancer. The family has requested IN LIEU OF FLOWERS AND PLANTS, that memorials be given to: The Aquinas Endowment Fund, David City VFD or Nebraska Wesleyan. Chris was born on November 28, 1966 to Jack and Jan (Polivka) Vandenberg. He attended East Butler High School, graduating in 1985. He went on to attend SECC at Milford, where he earned an Associates Degree in Diesel Mechanics. Chris married Julie Kobza on August 26, 1989 at St. Peter's Catholic Church in Bellwood, Four children were born to this union. Chris worked at Case IH in Seward before returning home to farm. He was a member of St. Francis(Center) Church where he also served as a lector. He was a parish trustee and also sat on the cemetery board. Chris took pride in helping to keep the parish grounds well manicured and looking well groomed every summer. He was a 3rd degree Knight of Columbus and the vice-president of the David City Rural Fire Board. He was a past member of the Aquinas/St. Mary's School Council, the Brainard VFD and Center Township Board. Chris' pride and joy were his children. He loved attending their activities and always encouraged them to do their very best. He taught them by his example and always placed his family first. He valued his friends and their friendship. Chris will forever be remembered as an incredible father, loyal and devoted husband, dedicated son and friend to many. Chris is survived by his wife: Julie; children: Kelby of David City, Kristin of Henderson, NE, Kalen and Karissa both of Lincoln; his parents: Jack and Jan Vandenberg of David City; brothers: John(Linda) of David City and Jason(Shelley) of Phoenix, AZ; mother and father-in-law: Hank and Bonnie Kobza of Bellwood; brothers-in-law: John(Kim) Kobza, Bob(Laura) Kobza, Ed Kobza, Marty(Nicke) Kobza, Tom(Jen) Kobza, Tony(Sydney) Kobza; sister-in-law: Cathy(Jamie) Yindrick; and several nieces and nephews. He was preceded in death by his grandparents: Martin and Alice Vandenberg and Edward and Agnes Polivka.

Christopher J. Vandenberg, 50, of David City died Tuesday, May 23, 2017 at his residence, near David City, after a valiant battle with cancer. The family has requested IN LIEU OF FLOWERS AND PLANTS, that memorials be given to: The Aquinas Endowment... View Obituary & Service Information

The family of Christopher J. Vandenberg created this Life Tributes page to make it easy to share your memories.