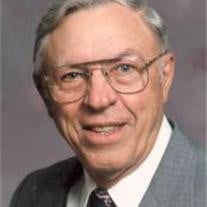 Memorial service will be held February 6, 2013 at 11:00am at Trinity Lutheran Church in Columbus. Christian Frederick Dahmke, 93, David City, passed away on January 23, 2013 at David Place. He was born on August 4, 1919 to Frederick and Marie (Backhaus) Dahmke, on a farm southeast of Millard near Chalco, Nebraska. The family later moved to a farm north of Millard at the present site of the Millard Library. He attended school in Millard and completed the 8th grade at the Lane School and graduated from Millard High School in 1935. He held several jobs from 1935 to 1941 including Northwestern Bell Telephone, for his uncle Emil Dahmke at the Millard Chevrolet Garage and Omaha Steel. In December, 1941 he enlisted in the United States Coast Guard. After completing basic training at Algiers, Louisiana, he was assigned to the USS Leonard Wood, APA-12 (Amphibious Personnel Attack Transport) and reported for duty in April, 1942 at the Philadelphia shipyard. He served on the Leonard Wood until March 27, 1945 in Engineering and later the Electric Shop. The Leonard Wood transported troops in both the Atlantic and Pacific Theater, including such destinations as North Africa and Sicily, and from Hawaii to the Gilbert Islands, Kwajalein, Eniwetok and Guadalcanal. After completing his tour of duty on the Leonard Wood he served on the CG Cutter “Dogwood” on the Mississippi River until he was discharged on October 4, 1945. He returned to Omaha and worked on his parents’ farm. In 1946 he met Eulalia L. Engel at the Chermot Ballroom in Omaha. Chris and Eulalia were married on November 16, 1947 at Trinity Evangelical Lutheran Church in Columbus. They lived in Columbus until 1956, where Chris worked at the Central Electric & Gas Company. He received a promotion to Manager and they moved to Osceola from 1957 and in 1971 after another promotion they moved to David City. He retired from Minnegasco in 1982. Chris was a member of the Chamber of Commerce, the Lions Club in Osceola, Rotary Club in David City and served on numerous committees and helped with many community projects, including raising money for the Hruska Public Library. He served as president of the David City Rotary Club in 1974-75. He was a member of the Masonic Lodge, the Pawnee Shrine Club, Sesostris Shrine Club and became a member of the clown unit in 1979. In 1992 he received the Distinguished Service Award from the David City Chamber of Commerce and in 1993 he received the Grand Master’s Humanitarian Award from the Masonic Lodge. He is survived by his daughter Patricia of Elkhorn, Ne, son Mark of Lincoln, Ne, sister Mary Ann Steinauer, nieces and nephews: Linda Keller of Bellevue, Ne, Maire Estar of Hamilton, Mt, Teri Schupe of Madison, Ne, Ernie Steinauer of Nantucket Island, Ma, Bob Steinauer of Spokane, Wa, Gerry Steinauer of Aurora, Ne. He is preceded in death by his wife Eulalia, his sister Thelma Dahmke Nisley and parents, Fred and Marie (Backhaus) Dahmke. Memorial gifts to Jackson Cemetery in Duncan, Nebraska, Trinity Lutheran Church-Columbus, David City Library, David City Rotary Club or the Butler County Health Care Center.

Memorial service will be held February 6, 2013 at 11:00am at Trinity Lutheran Church in Columbus. Christian Frederick Dahmke, 93, David City, passed away on January 23, 2013 at David Place. He was born on August 4, 1919 to Frederick... View Obituary & Service Information

The family of Christian Dahmke created this Life Tributes page to make it easy to share your memories.

Send flowers to the Dahmke family.