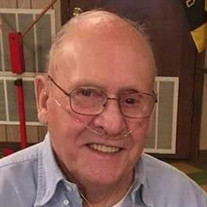 Charles W. Brandenburgh, 92, of Bellwood, died Sunday, June 25, 2017 at David Place in David City. Memorials: In Care of the Family Charles was born on February 21, 1925 on the farm near Bellwood, Nebraska to Lemuel J. and Etta (Smith) Brandenburgh. After graduating from Bellwood High School in 1943, he worked at a local gravel pit and did auto repairs. He married Lila J. Kruse on June 3, 1947 at the United Methodist Church in Bellwood and three children were born to this union. Charlie drove his own stock truck shortly after he married. He later went on to own and operate Brandenburgh Repair in Bellwood for over 50 years. He was always available to help those in need, whether they were stuck in a ditch, stranded in the fields or needed a major engine overhaul. He was a caring and giving person, strong in faith, and instilled a sense of responsibility in his family. He was a hard worker, but he also enjoyed life. He liked to hunt, fish, go dancing and spend time with family, especially his grandchildren. Charlie was very proud of his family and their accomplishments. He loved to talk to people, and you quickly made a friend with Charlie. He left a legacy for his family and will be missed by all. Charlie is survived by his wife of 70 years, Lila, Sons: Chris(Joanna) Brandenburgh of Bellwood, Chuck(Barb) Brandenburgh of Lincoln, and daughter: Connie(Dean)Heins of David City, one brother: Jim(Delores)Brandenburgh of Arlington, TX,, sister: Thelma "Babe" (Don) Peters of Bellwood, Brother-in-law; Richard (Theresa) Kruse of Leigh, NE, 10 grandchildren: Stacy (Pat) Cabela, Dr. Mandy (Mike) Johnson, Clint Brandenburgh and fiance, Celeste Palensky, Mike (Trish) Heins, Dustin (Tiffany) Heins, Jake (Jaci) Heins, Gretchen (Tim) Bixenmann, Sara (Russ) Ellis, Dr. Lance (Amy) Brandenburgh and Jordan Brandenburgh; 18 Great-grandchildren, and several nieces and nephews. He was preceded in death by his parents, two sisters: Golda Grigsby and Mildred Mais, and four brothers: Ronnie, Lemuel "Buck", Richard and Robert Brandenburgh.

Charles W. Brandenburgh, 92, of Bellwood, died Sunday, June 25, 2017 at David Place in David City. Memorials: In Care of the Family Charles was born on February 21, 1925 on the farm near Bellwood, Nebraska to Lemuel J. and Etta (Smith) Brandenburgh.... View Obituary & Service Information

The family of Charles W. Brandenburgh created this Life Tributes page to make it easy to share your memories.

Send flowers to the Brandenburgh family.