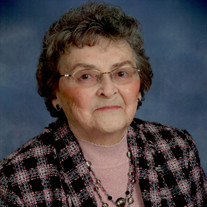 Celestine "Sally" Vandenberg, 89, of Brainard, passed away on Friday, December 31, 2021 at Bryan East Medical Center in Lincoln. IN LIEU OF FLOWERS, PLANTS, AND STATUES, the family has requested memorials be given in Care of the Family. Celestine... View Obituary & Service Information

The family of Celestine "Sally" Vandenberg created this Life Tributes page to make it easy to share your memories.

Celestine &quot;Sally&quot; Vandenberg, 89, of Brainard, passed away on...