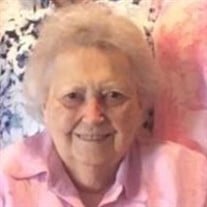 Celestine "Sally" M. Bartunek, 92, of David City died Friday, July 23, 2021 at Tabitha Journey House in Lincoln. IN LIEU OF FLOWERS, PLANTS AND STATUES: Memorials may be given: In Care of the Family, Mass Offerings or Aquinas Guardian Angel Fund. Sally Bartunek was born on November 2, 1928 to James and Stella (Hanis) Slosser during a blizzard on their farm near Bruno, Nebraska. She attended grade school until 8th grade at District 46, and then went to Abie High School until 11th grade. She spent her senior year at Schuyler High School and graduated in 1946. During her final year in high school, she worked for her room and board. After graduating she took care of her grandparents. On August 10, 1949, she married her husband, Eugene, at Ss Peter and Paul Church in Abie, Nebraska and three daughters were born to this union. Sally was a homemaker and worked at St Joseph’s Villa in housekeeping and laundry. She also enjoyed traveling and was able to visit 48 out of the 50 states. Sally traveled to Mackinac Island and was fortunate to be in San Francisco to see Pope John Paul II. Sally had a strong faith and was a member of St. Mary’s Church, PCCW and the Catholic Daughters of the Americas. She loved her garden and flowers. Her famous apple pie will be missed along with her rohlicky and kolaches. Sally crocheted many afghans that are treasured by her family. Sally and Eugene enjoyed polka music and dancing the waltz. Sally is survived by her 3 daughters, Deborah (Mike) Richter of David City, Kathleen (Ron) Rees of Greeley, Colorado, Janelle (Robert) Marsh of Malcolm, Nebraska, and sister, Stella Mihulka of Omaha, 4 grandchildren: Jennifer (Greg) Kleinschmit, Heather (Dana) Richter-Egger, Meagan (Miah) Richards, Michelle Richter, 14 great grandchildren: Xavier, Gillian, Gretchen, and Anneliese Kleinschmit, Madison, Grant, Thomas, Jonathan, Samuel, and Aaron Richter-Egger, Isaac, Anika, Lucas, and Maria Richards. She was preceded in death by her parents, husband, Eugene in 2016, grandson, Jeffrey Rees, sister, Irene Hines, and brother, James Slosser

Celestine "Sally" M. Bartunek, 92, of David City died Friday, July 23, 2021 at Tabitha Journey House in Lincoln. IN LIEU OF FLOWERS, PLANTS AND STATUES: Memorials may be given: In Care of the Family, Mass Offerings or Aquinas Guardian Angel... View Obituary & Service Information

The family of Celestine "Sally" M Bartunek created this Life Tributes page to make it easy to share your memories.

Send flowers to the Bartunek family.