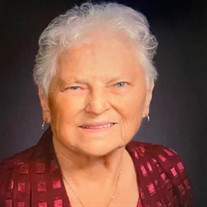 Catherine Marie Hoeft, 83, of David City died Sunday, December 26, 2021 at Butler County Health Care Center in David City. The family has asked that IN LIEU OF FLOWERS, PLANTS, and STATUES, Memorials be given in care of David City Volunteer Fire Department, Nebraska Firefighters Museum of Kearney, or Family Choice. Catherine (Vandenberg) Hoeft was born in Brainard Nebraska on 4-23-1938 to Henry & Helena Vandenberg, she was the youngest of 4 children. She graduated from Dwight Assumption High School in 1956. She was united in marriage to Norman E. Hoeft on December 27, 1958 at St. Francis Center Church, seven children were born into this union. The couple lived and raised their children in David City, NE. Catherine was known to all as “Marie”, she worked in David City at LT&T as a Phone Operator to begin with and then as the Cable Clerk for 20 years. She Volunteered at Aquinas High School in the Office, was Vice Chairman for the Sunshine Court Board, and a member of St. Mary’s PCCW, David City Fire Fighters Auxiliary, St. Mary’s and Aquinas High School School Boards, St. Mary’s Church Board, and sang in the Church Choir. Marie loved her family and enjoyed family gatherings, she was known by all, even the neighbors kids knew about the famous “Red Bat”, as kids we have lots of memories and the grandchildren remember the famous red bat. We all giggle about these memories; she has even pulled it out on the Son-in-laws. Marie also loved her Husker Volleyball Girls, and enjoyed watching them play, her favorite line was, “Come on girls you can do it!!” Marie is survived by her husband: Norman, children: Chris (Larry) Burbach, Deb (Tom) Svoboda, Mike (Denise) Hoeft, Linda (Terry) Bartunek, Pat (Jackie) Hoeft, Tim (Lisa) Hoeft, Tom (Kari) Hoeft, she also was survived by 37 Grandchildren, and 20 Great Grandchildren. Sister and Brother-in-law: Mary & Alan Minchow, Sister-in-laws: Joan Vandenberg & Sally Vandenberg. She was preceded in death by her parents: Henry & Helen Vandenberg, parent-in-laws: John & Naomi Hoeft, Son-in-law: Bruce K. Crook, Sister & Brother-in-Law: George & Beatrice Hotovy, Brothers: Ernest & Fredrick Vandenberg

Catherine Marie Hoeft, 83, of David City died Sunday, December 26, 2021 at Butler County Health Care Center in David City. The family has asked that IN LIEU OF FLOWERS, PLANTS, and STATUES, Memorials be given in care of David City Volunteer... View Obituary & Service Information

The family of Catherine Marie Hoeft created this Life Tributes page to make it easy to share your memories.

Send flowers to the Hoeft family.