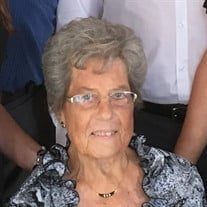 Carolyn Woita, 80, widow of Don, of Valparaiso, died Saturday, August 25, 2018 at St. Elizabeth's Hospital in Lincoln. Memorials: Family Wishes Carol was born on October 3, 1937 in Brainard, Nebraska to Otto and Lillian (Brochtrup) Holesovsky. She attended Holy Trinity Grade School, graduating from Brainard High School in 1955. She went on to attend St. Mary's College in Omaha, and she worked at Northern Natural Gas Company until her marriage to Don Woita on November 28, 1959 at Holy Trinity Catholic Church in Brainard. Four children were born to this union. Carol was a homemaker, mother, and grandmother, and she also worked in various secretarial jobs during her lifetime, retiring from UNL after 20 years. Carol was a member of Sts. Mary and Joseph Catholic Church in Valparaiso. She was a member of the Altar Society and a past president. She also belonged to the Saunders County Election Board, Red Hat Society, Farmerette's Extension Club, and Saunders County Democratic Party. She was also a 4-H leader for many years. She enjoyed gardening, flowers and loved birds, especially Cardinals. She also liked to bake, sew, travel, and was a fabulous cook. She enjoyed time with her family, especially her grandchildren and great-grandchildren. Carol is survived by her sons: Bruce (Lisa) and Bryan (Lori) both of Valparaiso, daughters: Diane Znamenacek and Denise (Quinten) Dallas both of Lincoln. 8 Grandchildren and 2 Step-grandchildren, 2 Great-grandchildren and 4 Step-great-grandchildren. Sister; Greta (Joe) Massa of Bloomington, IL and Sister-in-law: Flo Holesovsky of Loveland, Co. She was preceded in death by her parents, her husband, Don on July 27, 2018, and brother David.

The family of Carolyn Woita created this Life Tributes page to make it easy to share your memories.

Customized sympathy cards. Mailed for you.