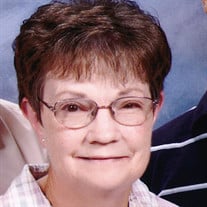 Carol K. Palik, 70, of David City died Thursday, August 27, 2015 at her residence. Memorials: Masses, Caring Voices or Hruska Public Library Carol was born on October 18, 1944 to John and Agnes(Mannlein)Reisdorff at Gothenburg, Nebraska. She was in the first class to graduate from the new Aquinas High School in 1962. She married Victor Palik on June 22, 1963 at St. Mary's Catholic Church in David City. Four children were born to this union. Carol's main focus was God and family. She always made sure her family had what they needed, no matter the sacrifice. Carol helped Vic as bookkeeper at his IGA store. After they sold the store, she also worked in bookkeeping at various jobs, including the Butler County Courthouse and Filter Care. Carol was also very involved in the community . She was on the Friends of the Library Board, Young Homemaker Extension Club, Red Hat Society, St. Mary's PCCW, and bible study group. She enjoyed sewing, quilting, reading, crocheting, baseball, especially attending baseball games when her grandchildren were involved. She enjoyed taking walks with family and friends. After the sudden loss of her son, Brian in 2001, she and Vic took in Brian's son, Brandon and raised him as their own son. Family meant everything to her and her love, concern, care and compassion will be truly missed. Survivors: Husband, Vic, sons, Kurt(Shelly) Palik of Brainard and Jeff(Lori)Palik of David City, daughter, Diane(Phil)Swinscoe of Lincoln, 10 grandchildren: Michael and Joseph Swinscoe, Joshua, Kaleb, Brandon, Brittney, Jordan and Kaitlyn Palik, Kennen, and Parker Robinson. brother: Gene(Linda)Reisdorff of Denver, CO, sister: Judy(Ken)Kerkman of Lincoln, NE. She was preceded in death by her parents, son, Brian in 2001, and one brother, Jerry in 2010.

The family of Carol K Palik created this Life Tributes page to make it easy to share your memories.

Send flowers to the Palik family.