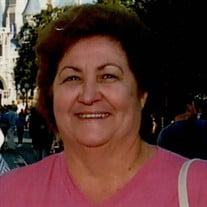 Beverly Lachance, 75, passed away on Tuesday, April 7, 2020 at the Sacred Journey Hospice in McDonough, GA. In lieu of flowers and plants, the family requests memorials in care of the family. Thank you. Due to the restrictions in place from federal & state governments because of the COVID-19 virus, the family will have a private funeral service. If you wish to support the family, you may attend the burial service, but we ask that you remain in your vehicles during the committal. There will be no viewing or visitation with family at this time. The family will hold a public Celebration of Life service at a later date when conditions permit. Beverly was born on August 12, 1944, to Arlie & Bessie(Slegl)Hascall at David City, Nebraska. She attended David City elementary school and graduated from David City High School in 1962. During her teen years, she was a member of Job's Daughters. After high school, she went to work in Fremont, where she met her future husband, who was stationed at Scribner Air Force Base. On June 18, 1964, she married John Lachance at Yankton, SD. Four children were born to this union. John & Beverly moved to Ft. Lauderdale, FL where all their children were born. When the children were young, she would clean houses for FBI agents in the area. She was well known to be a trusted and confidential person that they could trust. After the children were older, she went to work at Arthur & Arthur Modeling Agency where stayed for many successful years and eventually went on to own her own agency. The couple later moved to Atlanta, GA, where they would split time between their Georgia home and their Nebraska home in David City. Beverly loved to garden and was a wonderful cook She would go out to her big garden and bring in fresh produce for many meals. She was a big fan of Elvis music, movies and trivia. Her favorite time of year was Christmas, and she would make sure that everything was extra special on Christmas morning with decorations, food, presents and atmosphere. Beverly is survived by her husband of 55 years, John of Sharpsburg, Ga, three sons: Michael Lachance of Glenwood, Iowa, Todd(Barbi)Lachance of Sebastian, FL & Shawn Lachance of Rockledge, FL, one sister, Donna Meyers of Fremont, 6 grandchildren: Bryce, TJ, Briana, Kyle, Blake & Ashlee, three great-grandchildren: Roslyn, Natalia & Nicolette. She was preceded in death by her parents, one daughter, Monique, one brother and one sister.

Beverly Lachance, 75, passed away on Tuesday, April 7, 2020 at the Sacred Journey Hospice in McDonough, GA. In lieu of flowers and plants, the family requests memorials in care of the family. Thank you. Due to the restrictions in place... View Obituary & Service Information

The family of Beverly Lachance created this Life Tributes page to make it easy to share your memories.

Send flowers to the Lachance family.