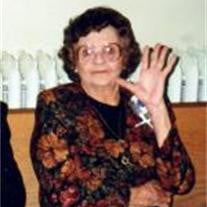 Betty L. Sylvester, 88, of Bellwood, died Thursday, May 27, 2010 at St. Joseph's Villa in David City. Funeral Services will be Saturday, May 29, 2010, 10:00am at Chermok Funeral Home, David City. Burial will be in the Bellwood Cemetery. At Betty's request, there will be no viewing. Memorials may be given in care of the family. Betty L. Gunderson was born on December 15, 1921 at Bellwood, Nebraska to Frank and Irene(Grant)Gunderson. Her mother passed away when Betty was three years old. Her father, Frank was a pharmacist who owned and operated his own pharmacy in Bellwood. Being left with seven children, Frank hired a caretaker for the children and also a housekeeper. Betty attended school in Bellwood and graduated from Bellwood High School in 1941. After graduation, Betty married long time boyfriend Maurice D. Sylvester on June 20, 1941 in Schuyler, Nebraska. After the ceremony, they held a chivaree in Bellwood. Betty and Maurice left the following Monday for North Platte where Maurice was employed. Later, Maurice was drafted causing Betty and Maurice to move to Illinois, Tennessee and North Carolina. Betty worked various jobs in those states until in 1944, Maurice was deployed to Europe and Betty returned to Bellwood for a short time before moving to Lincoln where she was employed. Maurice returned from Europe in 1945 and they returned to Bellwood. Betty enjoyed fishing, stock car races, ball games, animals, especially her cats, gardening, vacations and motorcycle trips. She truly loved to watch it rain and would stop whatever she was doing to enjoy the rainfall. In later years, Betty moved to David City and in 2005 became a resident of St. Joseph's Villa due to failing health. Betty is survived by her husband, Maurice, her three children: James Dale(Niki)Sylvester of David City, Terry Lee(Karen)Sylvester of Bellwood and Susan Ann(Marty)Birkel of Bellwood. Her 14 Grandchildren: Jamie(Paula) Sylvester, Jessica(Matt)Richards, Jennifer Sylvester, Jaydn Sylvester and Sydni Sylvester; Cory(Jenny)Sylvester, Jason Sylvester, Amber(Chad)Wiedeman; Tonya Lauterbach, Tracy(Levi)Macken, Casey(Brian)Nickolite, Dustin Scow, Heath(Justina) Birkel and Hadley(Tena)Birkel; Her 19 Great-grandchildren: Broderick Sylvester and Cade Richards, Jackson Sylvester, Ciara and Colin Lauterbach, Kylee, Jadyn and Dalton Macken, Jaylynn Sylvester, Karissa, Seth and Austin Nickolite, Jazzy and Bo Birkel; Tiffany(Dustin)Heins, Stacei(Shane)Anderson, and Martin, Wyatt and Samantha. 2 Great-great grandchildren: Bella Heins and Kenley Anderson; Many nieces and nephews. She was preceded in death by her parents, two grandchildren: Shannon Sylvester and Heather Birkel; two brothers: Wilton(Bud) and Donald Gunderson; four sisters: Lucille Daly, Lorraine Napier, Frances Brakhage and Katherine Paczosa.

Betty L. Sylvester, 88, of Bellwood, died Thursday, May 27, 2010 at St. Joseph's Villa in David City. Funeral Services will be Saturday, May 29, 2010, 10:00am at Chermok Funeral Home, David City. Burial will be in the Bellwood Cemetery.... View Obituary & Service Information

The family of Betty Sylvester created this Life Tributes page to make it easy to share your memories.

Send flowers to the Sylvester family.