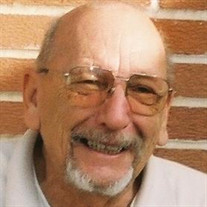 Bert E. Weber, 84, of Columbus, formerly of David City died Wednesday, July 15, 2015 at Golden Living Center in Columbus. IN LIEU OF FLOWERS AND PLANTS: Memorials to Family Wishes. Bert E. Weber was born on March 13, 1931 to Louis and Ella (Carstens) Weber at Beatrice, Nebraska. He graduated from Beatrice High School in 1948. On December 26, 1951 he married Anita Esch at Trinity Lutheran Church near Beatrice. Four children were born to this union. Bert entered the US Air Force in December of 1950. He served one year in Korea as staff sergeant and was honorably discharged in December of 1954. After he got out of the service, Bert worked as a mechanic in the Beatrice area and then moved to Glenwood, Iowa to start work in an auto parts store with his cousin. In 1968, they moved to David City, where he bought the local auto parts store, adding stores in Schuyler and North Bend in later years and finally retiring by selling the stores to his son, Mark in 1984. Bert and Anita moved to Columbus in 2012, where they resided until his death. Bert enjoyed watching sporting events both in person and on television. He liked to play cards, travel, and take long walks with Anita. He was a member of American Legion Post 125/VFW Post 5814 of David City, Immanuel Lutheran Church in Columbus and past member of Redeemer Lutheran Church, David City. Bert was very active at Redeemer. He was an elder and also served as financial secretary, where he was involved in the drive to pay down the church mortgage and hold a mortgage burning ceremony. He was also very instrumental in the building campaign for the new addition to the church. Bert is survived by his wife, Anita, children: Mark(Carol)Weber of Cedar Bluffs, NE, Mary(John)Beller of Columbus, NE, Jean(Scott)McGill of Waverly, NE, and James(Anne)Weber of Columbus, NE, 12 Grandchildren: Matthew(Karin)Beller, Daniel(Becky)Beller, Lori(Benson)Peretti, Thomas Beller, Peter Weber, Margaret Weber, Paul Weber, Allison McGill, Kelsey McGill, Benjamin Weber, Rachael Weber and Megan Weber .7 Great-grandchildren, and sister-in-law: Vera Weber of Beatrice, NE. Bert was preceded in death by his parents, a grandson, Michael Beller, two brothers, Walter and Waddell Weber.

The family of Bert E. Weber created this Life Tributes page to make it easy to share your memories.

Send flowers to the Weber family.