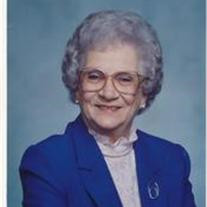 Berniece A. Otto, 97, of Ulysses, passed away Tuesday January 8, 2013 in Lincoln. Visitation: Friday, January 11, 5:30-7pm at Chermok Funeral Home, David City. Internment: Saturday, 1:00pm at Ulysses Township Cemetery, Memorial Services Sat 2 PM, United Methodist Church, Rising City. Memorials in lieu of flowers to the church or Food Bank. Berniece Otto was born October 3, 1915 in Spalding, NE to Earl and Fern(Morgan) Kelly and grew up in Garrison, NE. She graduated from David City High School in 1933 and worked in Lincoln, NE, before her marriage to Read Butler Otto on January 9, 1940. They lived on the Otto farm near Ulysses, NE where they raised their three children and farmed with Read’s brother Chuck Otto for thirty years. Read passed away on January 9, 1977. Berniece moved from the farm to Rising City, later to Lincoln and eventually to Holmes Lake Manor Nursing Home. Berniece was a very active member of the Ulysses Methodist Church Womens Club, the Ulysses Community Club and Eastern Star. She and Read loved to go dancing with friends and they belonged to dance clubs in Utica and Rising City. She also loved to play bridge with friends. Most of all, Berniece loved her home and family and was always very active in their lives and activities. After the loss of Read, her love and devotion to her family provided her strength and purpose. To them, she was the matriarch of the family and was honored appropriately. She is survived by children Lynda and Jim Endicott of San Diego, CA, Rick and Terry Otto of Lincoln, and Sandra Otto of Ulysses and grandchildren Patrick and Jen Chansler of Weatherford, OK, Kelly and Eric Peters of Castle Rock, CO, Tyler Otto of Denver, CO, Trevor Otto currently serving in Afghanistan, Shelley and Ben Nelson of Indianapolis, IN, Tamra and Joe Mick of Lincoln, Heidi Otto of Beaufort, SC, Matt and April Otto of Ceresco, Brad and RhoAnna Endicott of San Diego, CA. She has nine great grandchildren and one great-great granddaughter. She was preceded in death by her husband Read, son Gary, her parents, and sisters Marie Barlean and Phoebe Shandera.

The family of Berniece Otto created this Life Tributes page to make it easy to share your memories.

Berniece A. Otto, 97, of Ulysses, passed away Tuesday January...

Send flowers to the Otto family.