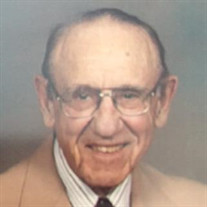 Bernard N. Meysenburg, 96, of Lincoln, formerly of David City, died Monday, August 15, 2016 at Homestead Care Center in Lincoln. Memorials: In Care of the Family. Bernard was born on August 31, 1919 at David City, Nebraska to Henry and Amelia(Krones)Meysenburg. He entrered ths U S Coast Guard in May of 1941 and served as Quartermaster until his discharge in 1946. His military duty took him to many parts of the world. He had a great love of baseball and began playing early in life. He played during his military service, and after he returned home, he continued to play when ever possible, even playing in the Pioneer Night League. He married DeLores Rejda on September 22, 1952 at Immaculate Conception Church, Ulysses. Two children were born to this union. Bernie was active in the American Legion and in 2015, was honored as a 70 year member by the Kregger Legion Post 125/VFW Post 5814 of David City. He also enjoyed hunting, farming, and repairing old tractors. He worked as a mechanic and parts person for John Deere for over 60 years. He enjoyed taking family vacations, trips out to the farm to check crops, and the occasional casino trip. He enjoyed spending time with his grandchildren and great-grandchildren, Husker Football and watching the Kansas City Royals. In May of 2016, he was honored to throw out the first pitch during Military Appreciation Night at Haymarket Park for the Nebraska vs Penn State Baseball Game. Bernie is survived by his wife, DeLores, sons, Bruce(Kathy)Meysenburg and Patrick(Suzanne)Meysenburg both of David City, Sister-in-law: Grace Meysenburg of Sidney, Ne, 4 Grandchildren: Jaci(Jake)Heins, Craig(Laura)Meysenburg, Jennifer(Aaron)Balsillie and Sarah Meysenburg, 6 Great-grandchildren: Alison and Emma Heins, Colin, Natalie, and Morgan Meysenburg and Jocelyn Balsillie. He was preceded in death by his parents, three brothers, Joe, Carl Anthony and Hank, and five sisters, Sr. Clarice, OSF, Sr. Agnes, OSF, Sr. Loyola, O.S.U., Caroline Reisdorff, and Anna Rose Johnson.

The family of Bernard N Meysenburg created this Life Tributes page to make it easy to share your memories.

Send flowers to the Meysenburg family.