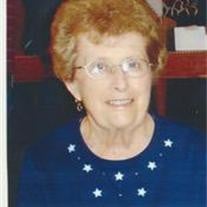 Bea Miriovsky, 84 of David City, passed away on Thursday, September 26, 2013, at St. Joseph's Villa in David City. Funeral Mass will be 10:00am Monday, Sept. 30 in St. Mary's Church, David City with Fr. Bernard Kimminau as celebrant. Burial will be in the church cemetery. Viewing will be Sunday, 5-7pm followed by a 7pm Wake and Rosary. Catholic Daughters of America will recite a rosary at 5pm on Sunday at St. Mary's Church. Additional viewing will be Monday, 9-10am at the church. Memorials: In Care of the Family. Beatta N. Palik was born November 21, 1928, and entered into God's kingdom on September 26, 2013, from St. Joseph's Villa in David City. She was born in David City to Anton and Hattie(Reznicek) Palik. She married Frank Miriovsky January 17, 1949, and became a farmer's wife and mother to their five children. They lived in Butler County their entire married lives. Beatta was known as Bea to her family and friends and Grandma Bea to her grandchildren and great grandchildren. She worked to provide a loving home and set an example for her children by her faith in God. When her son, Mark, was born fifty-one years ago, she became an advocate for the disabled. She devoted endless hours driving to doctors appointments and special schools for the disabled to ensure that Mark grew and became the special man he was. She was very involved in the three Catholic parishes of which she was a member over the years: Holy Trinity, Brainard; St. Francis, Center; and St. Mary's, David City. She was active in all the different women's organizations and helped bake and work for the churches' fundraisers. While attending St. Francis, Mark, with Beatta's encouragement, became an accomplished guitarist. Beatta helped form a youth guitar group to play at Sunday masses. When they moved to David City she helped form youth and adult choirs at St. Mary's. She was active with hospital visitation, new parishioners welcome group, and served on the Evangelical Committee. In 2006, she was honored with the Alumni Award from Aquinas High School for all her dedication to the three parishes. She was a devoted wife, mother, grandma and friend. Her love for her family and her faith in God are the most important components of her legacy. Beatta was preceded in death by her parents; her husband, Frank; her son, Mark; and her son-in-law Ron Coleman. She is survived by sons Mike (Sharon) Miriovsky, Marshalltown, IA; and Tom (Kim) Miriovsky, David City, NE; daughters Nancy (Ed) Schendt, Papillion, NE; and Joanie Coleman, McCook, NE; brother, Bob (Lois) Palik, Lincoln, NE; nine grandchildren, nineteen great grandchildren, and many relatives and friends.

The family of Beatta Miriovsky created this Life Tributes page to make it easy to share your memories.

Bea Miriovsky, 84 of David City, passed away on Thursday, September...

Send flowers to the Miriovsky family.