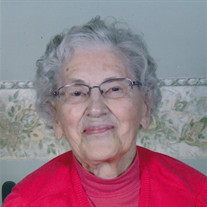 Beatrice M. Fadschild, 100, of Elkhorn, formerly of Rising City, died Wednesday, July 9, 2014 at Brookestone Meadows Care Center in Elkhorn. IN LIEU OF FLOWERS: Memorials to the First Lutheran Church or Donor's Choice Beatrice Minnie Skoda Fadschild was born on March 26, 1914 to Anton and Bertha(Janike)Skoda at the Skoda farm home near Rising City, Nebraska. She attended District 30 rural grade school and graduated from David City High School . Bea attended the University of Nebraska and upon earning her Teaching Certificate, taught at Millerton Grade School for two years. Beatrice was married to Coyle Fadschild on June 17, 1934. They made their home at the farm north of Rising City. They were the parents of four children. Besides her role as farm wife and mother, Bea(as she was affectionately known), was a life time member of the First Lutheran Church in Rising City. She was active in the church Women's Group for many years and enjoyed piecing quilts and preparing kits for the Lutheran World Relief. Bea was also a member of the farm neighborhood "Cornhusker Club". In 1980, Bea and Coyle left the farm and moved to David City. The continued to raise their vegetable and flower gardens and remained active for many years. Bea was a loving wife, mother, grandmother, and great-grandmother to her family whom she loved dearly. She was a great cook and took pride in preparing wonderful meals for farm hands as well as for her family and friends. She will be dearly missed but we shall always have many precious memories of those "good times". Beatrice is survived by her daughters Karen Sorensen of Pullman, WA, Linda Sorensen of Aurora, CO, and Beth(Ray)Zeilinger of Gretna, NE. one sister: Antonette Tillma of Schenectady, NY, six grandchildren and eight great-grandchildren. She was preceded in death by her parents, her husband, Coyle in 2007, her son, Robert, her sister,Mildred McGraw, and sons-in-law: Harold and Thomas Sorensen.

The family of Beatrice M Fadschild created this Life Tributes page to make it easy to share your memories.

Send flowers to the Fadschild family.