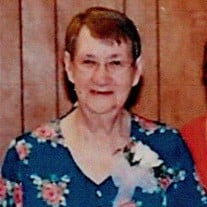 Ardith A. Hayes, 89, widow of "Gene", passed away, Sunday, August 4, 2019 at Ridgewood Care Center in Seward Memorials: United Methodist Church, Rising City Library, and Rising City VFD. Ardith was born on October 29, 1929 to Robert and Millie(Bratten) Farmer at Scottsville, KS. She attended locals schools, graduating from Scottsville High School in 1947. On October 30, 1947, she married Daniel "Gene" Hayes at Belleville, KS. Three children were born to this union. After marriage, Ardith was a full-time homemaker and mother. She cared for her mother for over 10 years and after her mother passed away, Ardith became a daycare provider for many children. After 20 years of childcare, she decided to retire from full-time work, but she continued to work with children by helping her daughter, Becky, with her daycare children. She was a member of the United Methodist Church in Rising City. She belonged to the Women's Society, Over 60's Club and was a volunteer at the Rising City Library. She enjoyed crocheting, needlepoint, playing cards, yard work, and tending to the large garden, canning the produce and making her famous dill pickles. Every Sunday, they would make homemade ice cream as part of the evening meal and at Christmas, they would make peanut brittle to be enjoyed by all. Ardith is survived by her daughters: Nila Hayes and Sandy Hansen, both of Lincoln and Becky(Jerry) Oborny of David City. 3 Grandchildren; Bobbi, Tom and David Oborny and nieces and nephews. She was preceded in death by her parents, her husband, Gene in 2017, granddaughter: Tina Oborny, son-in-law: Fred Hansen, three sisters: Versa, Marjorie and Nedra and several nieces and nephews.

The family of Ardith A Hayes created this Life Tributes page to make it easy to share your memories.

Send flowers to the Hayes family.