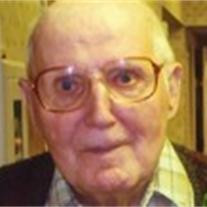 Anton "Tony" L. Samek, 88, of David City, died Easter Sunday, April 4, 2010 at the Butler County Health Care Center. A Funeral Mass will be held at 10:00 am Tuesday, April 6 at St. Mary's Church. Visitation will be from 4 - 7 pm Monday at St. Mary's Church followed by a 7 pm Knights of Columbus Rosary. Visitation will continue Tuesday one hour before services. Burial will be in St. Mary's Cemetery. Tony was born August 19, 1921 in Appleton to Adolph and Antonia (Svoboda) Samek. He was a life-long farmer. He served as an Altar Boy for 6 years, a Trustee for 8 years, an usher for 6 years, a Commentator for 10 years and was one of the first in the parish to Acolyte. He was a 3rd degree Knight and member of the Knights of Columbus for 56 years. Tony was a Butler County Supervisor for 32 years and during that time was instrumental in the building of the new courthouse, the new hospital, and the construction of the Abie-David City highway, and bringing Region 5 to David City. Tony was a 15 gallon blood donor and worked for Knott Funeral Home for 3 years. Tony served in the U.S. Army during World War II and recently donated some of his army memorabilia to the David City Veterans Museum. He was a fifty year member of the David City American Legion. Tony is survived by his wife, Rose, of David City, daughters: Carole Essink of Grand Island, Jan (Dick) Schmid of David City, Mary (Randy) Schultz of David City, Judy (Mark) Moravec of Grand Island, Susan (Kevin) Gustafson of Seward; sons: Tom (Jane) Samek of David City, Bob (Dee) Samek of David City and Steve (Monica) Samek of Omaha; 24 grandchildren, 19 great-grandchildren and 3 on the way; 3 step great grandchildren, brother: Fred Samek, brother-in-law John Rerucha; and sister-in-law: Marie Jirovsky. He was preceded in death by his parents, brother: Bill, sisters: Martha Piitz, Anna Rerucha and Rose Kozisek, and son-in-law: Jim Essink. In lieu of flowers, Memorials may be made to "Family's Wishes".

The family of Anton L. Samek created this Life Tributes page to make it easy to share your memories.