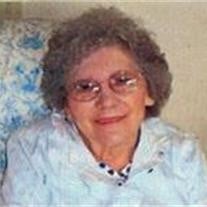 Ann T. Matulka, 90, of David City, died Wednesday, October 26, 2011, at St. Joseph's Villa in David City. Funeral Mass will be Monday, October 31, 2011, at 10:00am in St. Mary's Catholic Church in David City with Fr. Bernard Kimminau oficiating. Burial will be in Appleton Catholic Cemetery. Visitation will be from 2 to 4 PM on Sunday at Chermok Funeral Home and after 5 PM at St. Mary's Catholic Church in David City. Visitation will resume at 9 AM at the church on Monday. A parish wake/PCCW Rosary will be Sunday at 6:00pm at the church. Memorials have been suggested to Aquinas High School, Assumption Catholic Church or St. Joseph's Court. A luncheon will be held at the Knights of Columbus Hall immediately following the commital service at the cemetery. Ann was born on October 8, 1921 to Anton and Rose (Fuchik) Plasek near David City. On November 6, 1946, Ann was united in marriage to Joseph B. Matulka at Appleton. She was the proud mother of 11 children. She enjoyed her family and life on the farm, gardening, raising poultry, planting flowers, painting, Nebraska athletics, attending her children's sporting events, dancing the polka, cooking, baking as well as her pets. She was a member of Assumption Catholic Church, the Assumption choir as well as the Butler County Czech Club. Survivors include sons: David (Ruth) Matulka of Timberlake, N.C.; Dan (Deb) Matulka of Columbus; Bernard (Marianne) Matulka of David City; Joe F. (Anne) Matulka of Blair and Craig Matulka of Bee. Daughters: Roberta (Ken) Kramer of Papillion; Lora (Jeff) Higgins of Omaha; Patricia (Gupta) Sookram of Lincoln; Coleen Matulka of Arlington, TX; and Sonja (Bernard) Stolfa of Tulsa, OK; 24 grandchildren; 16 great-grandchildren; nieces and nephews. She was preceded in death by her parents; husband Joseph; daughter Janet Miller; a sister and brothers.

The family of Ann Matulka created this Life Tributes page to make it easy to share your memories.

Send flowers to the Matulka family.