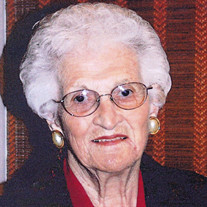 Alice Vandenberg, 93, of David City died Saturday, January 23, 2016 at St. Joseph's Villa in David City. IN LIEU OF FLOWERS: Memorials to St. Francis Church or Family Wishes. Alice Vandenberg was born in David City on July 25, 1922. She was the daughter of Lawrence and Anna (Zegers) Kearney and the last surviving member of her family. She was united in marriage to Martin Vandenberg on February 10,1942, at St Mary's Church in David City . Alice was a farmer's wife. She enjoyed working outside and helping with the chores and farm work. She raised a huge garden and many flowers and used her flowers for decorating St. Francis Church. Alice loved the animals on the farm especially her Sheltie dogs and numerous cats. Alice was a member of St. Francis Altar Society and a local knitting club. She was very active in the preparation of the annual spaghetti dinners, particularly the sauce. She took a variety of classes in sewing and enjoyed quilting, baking, handiwork, ceramics and sewing clothes for her daughters and herself. Her family was extremely important to her and the love of her life. She enjoyed the visits of her children, grandchildren and great- grandchildren. Pictures covered her walls and she loved to look at photo albums and hear about the activities of the family as well as hearing about life on the farm. Alice always had something to eat for her visitors and loved to serve angel food cake with strawberries or her homemade bread, which was a special treat. Alice is survived by her five children and spouses: Sharon (Jim) Bruner, James M .(Phyllis), John A. "Jack" (Jan), William(Vicky) and Laura Vandenberg; 12 grandchildren and their spouses and 25 great grandchildren: Patrick(Nancy) Jake, Lance, and Grant Bruner, Kimberly(Miles) Elise and Braden Ehlers, and Michael Bruner; Brian Vandenberg, Dave(Angela), Madison, Jordyn, Caden and Braylen Vandenberg, and Renee(Brad)Macy, Easton, and Leyton Howe; Chris(Julie), Kelby, Kristin, Kalen, and Karissa Vandenberg, John(Linda), Nolan, Dana, Colin, and Lauren Vandenberg, Jay(Shelly), Jessica, Seamus, and Jack Vandenberg; Angie Vandenberg, Amber Vandenberg, Bradley(Valerie), Kroy, and Hensley Vandenberg. She is survived by nieces, nephews, sisters-in-law, and many loving care givers and friends. She is preceded in death by her parents, her husband, Martin on July 25, 1999. Six sisters: Leona Beckius, Margaret Kearney, Katherine Callaghan, Elizabeth Ryan, Dorothy Plummer, and Ramona Youngberg, and one brother: James Kearney.

The family of Alice Vandenberg created this Life Tributes page to make it easy to share your memories.