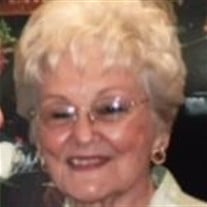 Alice Augustin, 92, of Shelby, passed away May 15, 2017 at St. Joseph's Villa in David City. Memorials have been suggested to: Aquinas Endowment Fund and Sacred Heart Catholic Church. Alice was born April 9, 1925 at home near Staplehurst, to Joseph and Anna(Hotovy) Dobesh. She attended District 70 Country School, in Seward Co. and graduated from Seward High School in 1942. Alice then graduated from St. Elizabeth's Hospital School of Nursing as a Registered Nurse in 1946. On June 13, 1949 she was united in marriage to Winard H. Augustin, in Bee, Nebraska. Alice was a member and past president of St. Elizabeth's Nurse's Alumni Association, and a member of the Nebraska State Nurse's Association. She was also a member of St. Ann's Guild, the American Legion Auxiliary, Friendly Neighbors Club, Sacred Heart Catholic Church, and she belonged to several card clubs in the area. Alice volunteered at Aquinas High School, Good Samaritan Center in Osceola, the Shelby Senior Center, and was a 4-H Leader for 10 years. She worked as a Registered Nurse and served on the advisory board at Good Samaritan for 10 years. Alice enjoyed making lemon meringue pie, rosettes and goopy cinnamon rolls. Alice is survived by her husband: Winard; daughters: Carmalita(Louie) DePauw, of Apex, NC, Diane J.(Allen) Moravec, of David City, and Teri(Alan) Logan, of Shelby; 9 grandchildren; 25 great-grandchildren; and several nieces and nephews. She is preceded in death by her parents; siblings: Annie Gruntorad, Arthur Dobesh, Raphael Dobesh, Joseph Dobesh; infant son: Steven; and infant great-grandson: Brody Moravec. There will be time for Fellowship in the church hall after the 7pm Rosary on Wednesday. A lunch will be served at the American Legion Hall in Shelby, following the funeral mass.

Alice Augustin, 92, of Shelby, passed away May 15, 2017 at St. Joseph's Villa in David City. Memorials have been suggested to: Aquinas Endowment Fund and Sacred Heart Catholic Church. Alice was born April 9, 1925 at home near Staplehurst,... View Obituary & Service Information

The family of Alice Augustin created this Life Tributes page to make it easy to share your memories.

Send flowers to the Augustin family.